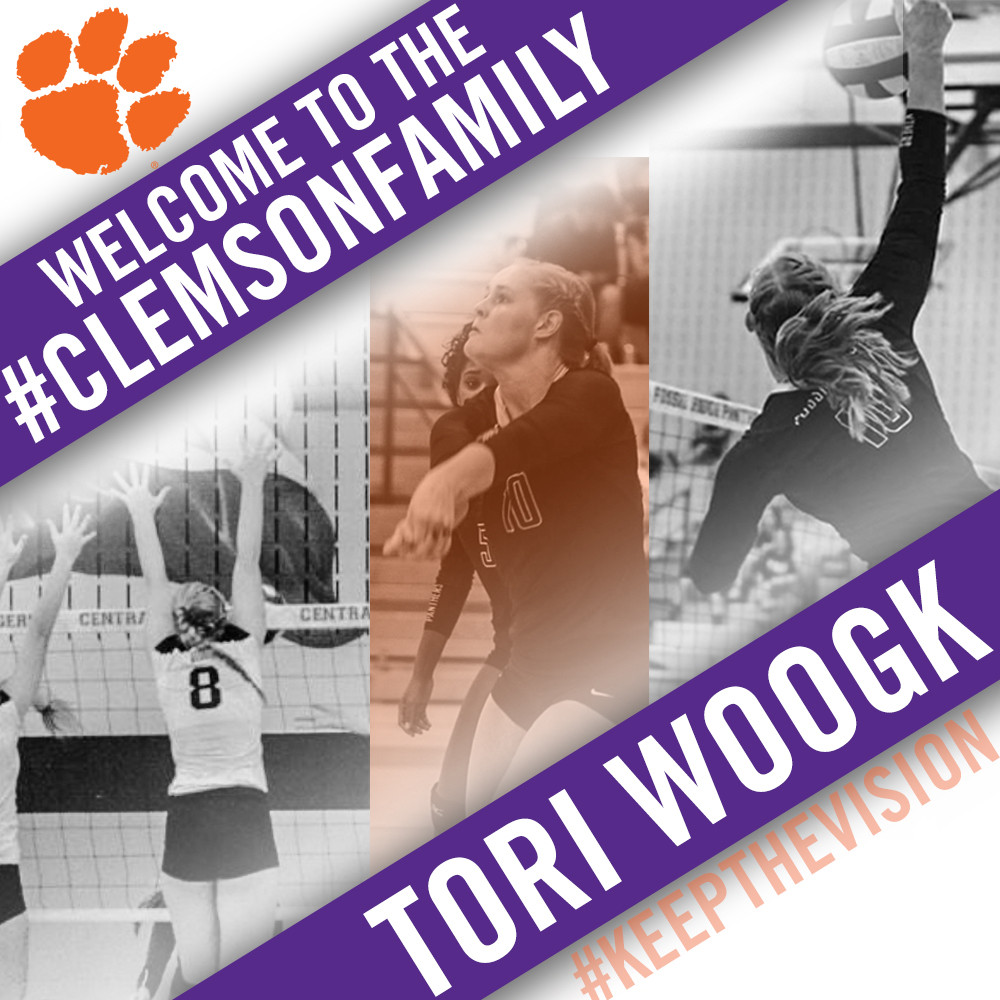 Volleyball Welcomes Woogk To The Family

CLEMSON, S.C. – Head coach, Hugh Hernesman lands his first Clemson signee and announces the first member of the 2016 recruiting class with the signing of Tori Woogk. The Keller, Texas native is a product of Fossil Ridge High School and Tejas Volleyball Club with plans to major in Sports Communication.

“I am most excited about being a part of the Clemson family because of the atmosphere and feeling of the campus,” said Woogk. “Everyone is always smiling… You get the feeling that you’re in the best place on earth.”

With little time to recruit after taking over Clemson’s program in March, Hernesman was excited to find a player of her Woogk’s caliber still on the board when he began piecing together the incoming class of 2016.

“We feel really fortunate that Tori was available when we arrived here in March,” said Hernesman. “Generally speaking, players with her potential and abilities are not available that late in the recruiting process. Even so, it still came down to us and a few very successful Power-Five schools.”

Woogk projects to develop into a six-rotation outside hitter as she dominated in nearly every facet of the game this past season. In her last high school season she registered 575 kills, averaging 6.12 kills per set to lead the Dallas/Fort Worth Metroplex. Her defense is just as impressive as she finished the year with 485 digs to average 5.16 per set and passed at a 2.04 average. She also logged 58 total blocks and 28 service aces.

“She was a little bit of a late bloomer who was perhaps miscast in her roles earlier in her club career,” said Hernesman. “With Tejas, she was given the opportunity to play on the left side and for all six rotations. It was a role that she excelled in and really impressed the staff and I.”

“Tori is an incredible athlete who is driven to be the best player she can be,” said Woogk’s club coach, Janine Smith. “She gives 100 percent every time she steps into the gym. She is that competitor that makes everyone around her better because of her work ethic and attitude. She truly is a joy to coach and I am looking forward to watching her continued success at Clemson.”

Over the course of her four years in high school ball, Woogk was an All-District performer all four years and earned First Team All-District honors each of the last three seasons. This past year she was named the District 5-6A Hitter of the Year.

Woogk’s head high school coach had nothing but praise for the four-year captain, recognizing the impact she had on Fossil Ridge volleyball.

“With Tori’s leadership, hard work and dedication for constant improvement, Fossil Ridge was able to improve to the point where we were able to contend for playoff opportunities in the state’s top classification,” said head coach Jennifer Chandler. “She was instrumental in changing the complete culture of the volleyball program that did not win a district game her freshman year, to one that was able to regularly extend matches as well as beat teams that finished in the top spots.

“Tori is one of those special people that only come around a few times in a coaches career. We will be forever grateful for the contributions that she made to our program and she will be greatly missed. Although she is talented athletically, the thing that stands out about her is her character, and the opportunity to build a relationship with her over the last three years has truly been a blessing!”

Coach Hernesman caught a glimpse of Woogk’s character and love for the game when he offered her a spot on Clemson’s roster in 2016.

“On top of Tori’s ability to contribute on the court, we love Tori’s passion for Clemson Volleyball. She was in near tears when I made the offer and recognizes what a great opportunity and incredible place this is. That type of passion makes players great and makes programs great.”