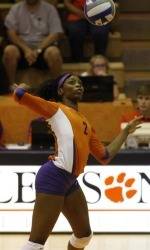 Volleyball Swings North for a Pair

Live stats will be available at ClemsonTigers.com for each match, and the Maryland match will stream as premium content on TerpsTV at umterps.com.

The Tigers defeated each of the teams earlier in the season in Jervey Gym, a 3-1 decision over BC and a 3-2 win over Maryland.

Clemson is fighting to move up in the ACC standings, and last weekend’s wins put them in excellent position to make a move. The Tigers sit alone in fifth place, two games above sixth-place Virginia Tech and Georgia Tech.

Junior middle hitter Sandra Adeleye was named ACC Player of the Week for her contributions to Clemson’s 2-0 weekend. She posted 35 kills, an average of 5.0 per set, and hit .491 while also recording her 1,000th career kill. Hannah Brenner also had a terrific weekend, averaging 13 assists per set, while guiding the Tigers to better than a .300 hitting mark in consecutive matches.

Alexa Rand continued her hot blocking streak, turning away 19 attacks on the weekend, including 11 against Duke.

Clemson will play on the road next weekend as well, as they go to NC State and North Carolina before returning home on Nov. 18 and 19.