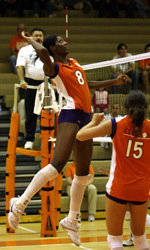 Hepburn, who entered the weekend’s action as the ACC leader in kills per set, tallied 21 for the third consecutive contest and hit an impressive .462 clip in her final homecoming match. The Dade Christian High School product also led Clemson with six total blocks on the day.

The Tigers, now 19-9 overall and 11-6 in the conference, bested the Hurricanes in nearly every statistical category – including kills, hitting percentage, digs and blocks – but Miami found a way to win and improved to 24-5 on the year and 12-5 against league foes.

Lane Carico led the Hurricanes with 20 kills and 19 digs while Genny Mayhew added 13 kills in the victory.

Lia Proctor recorded a double-double for the second straight match with 17 kills and 16 digs for Clemson. Abbott added 14 defensive saves in addition to her 20 kills as one of five Tigers in double-digits for digs.

After the intermission, Miami bounced back to earn their highest hitting percentage in the match with a .406 clip (16-3-32) in the third set. With the Hurricanes up 15-14 in the frame, Bridget Bomhack put down two kills and Lane Carico added another to surge Miami out to a 19-14 lead. They would close-out the frame with a 5-2 run led by kills from Angelica Ellis and Genny Mayhew for the 25-18 win.

The fourth set would be all Tigers, however, as they hit a dominant .459 clip (18-1-37) to quickly run out to an 11-4 advantage. In that stretch, Clemson’s Hepburn had three kills while teammate Abbott collected one. After clawing back to within 14-8, Miami couldn’t stop Lia Proctor down the stretch as she picked up four of her 17 kills in the match for four of the Tigers’ final nine points in the frame. Clemson earned the 25-18 win in the set to force a fifth and final set.

In the deciding set, Miami jumped out to a 4-2 lead behind three kills from Carico before Clemson called timeout. That, however, didn’t slow the Hurricanes offense as setter Katie Gallagher collected one of six kills in the match with a turnaround attack at the net to put Miami up, 6-2. An attack error by the Hurricanes ended the 5-1 scoring rally before a Gallagher block put Miami up, 7-3. Leading 7-5, the Hurricanes went on another 6-0 run and an attack error by the Tigers allowed Mayhew to serve-out a final ace for Miami.

Clemson will play host to Maryland and Boston College in its final home weekend of the 2008 season. The Tigers and Terps will square off at 7:00 pm on Friday, while Clemson will wrap up the home schedule against the Eagles on Saturday at 6:00 pm.