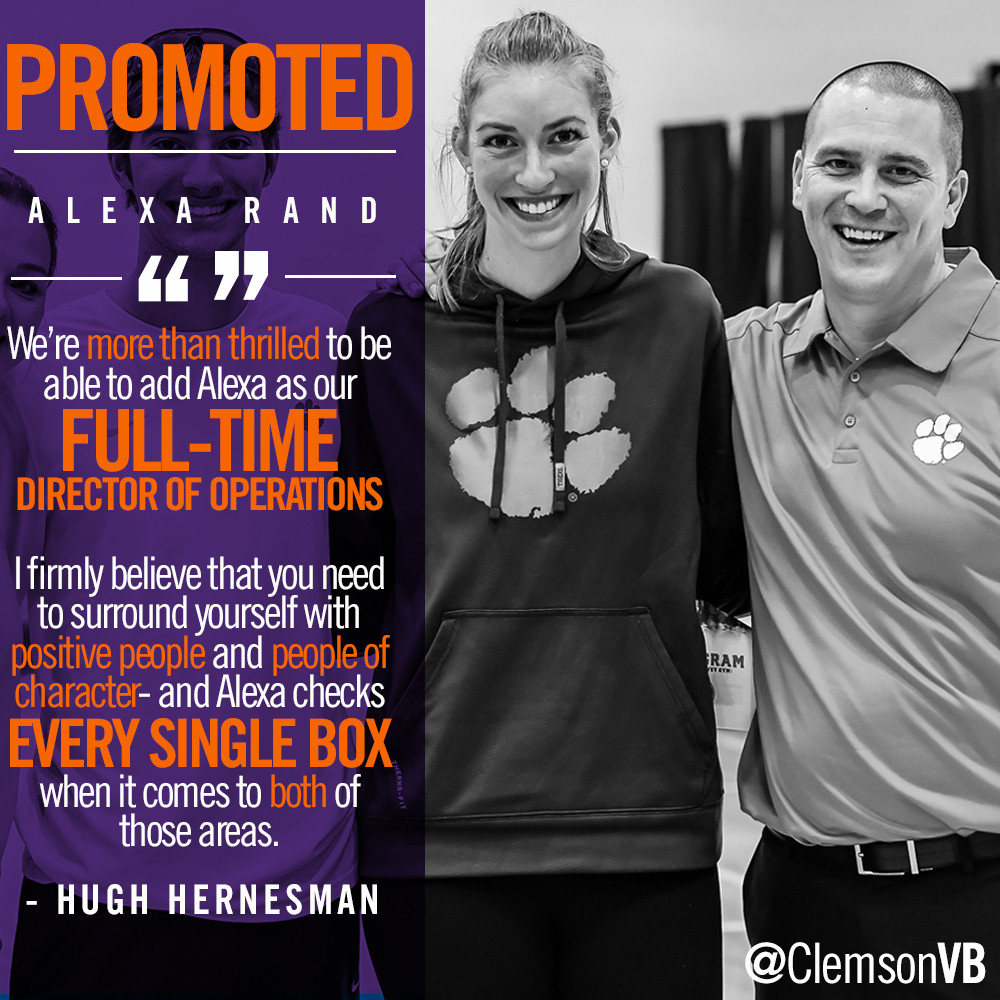 CLEMSON, S.C. – The Clemson volleyball coaching staff has announced that Alexa Rand has been hired as the full-time Director of Operations. Rand spent last season in the same role but as a graduate assistant.

“We’re more than thrilled to be able to add Alexa as our full-time Director of Operations,” said head coach Hugh Hernesman. “I firmly believe that you need to surround yourself with positive people and people of character- and Alexa checks every single box when it comes to both of those areas.”

“Alexa’s experience and passion for Clemson volleyball go without saying. Having played here and then to come back to get her Master’s degree after her professional career shows just how strongly she loves Clemson University. When the opportunity came open for her to get re-connected with the program she has so much pride in, it was a very logical hire and a decision that I know will make our program better.”

Rand is finishing her final year in the Counselor Education graduate program at Clemson and is entering her second year as Clemson volleyball’s Director of Operations. She played one season as a professional, from Aug. 2013 to May 2014, for EVS in Angelholm, which plays in the top volleyball league in Sweden. That season, her team placed third in the league, and Rand was named Most Efficient Attacker after recording the best hitting percentage among all players in the league.

The native of Mentor, Ohio was a star middle blocker for the Tigers from 2009-12. She earned All-ACC and AVCA All-Region honors as a junior in 2011 and ACC All-Freshman honors as a rookie in 2009, and was a three-time member of the All-ACC Academic team from 2010-12. Rand concluded her Clemson career with 822 kills and 614 total blocks. The 614 blocks rank second in Clemson history, and she also ranks second in block assists (517) and blocks per set (1.34) and third in career hitting percentage (.334). She recorded 157 blocks as a freshman in 2009, breaking the school record for blocks in a single season by a freshman. Rand earned her undergraduate degree from Clemson in Special Education in August of 2013.