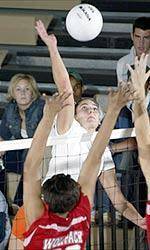 The Tigers controlled game one, winning by a score of 30-18. Leslie Finn led all hitters with five kills and a .357 hitting percentage, while Ryane Beasley and Liz Beckham added three kills each. Beckham led Clemson in defensive saves with nine and Lori Ashton led the Tigers at the net with three blocks. Stephanie Haskell dished out 12 assists with four digs and two blocks in game one. Maria DiLivio and Stephanie Smith recorded three kills apiece for the Terrapins. Fiona DeFreitas tallied seven digs and Aimee Huddleston recorded seven assists with two blocks for Maryland.

Clemson won a close game three 35-33 behind Finn’s nine kills and .500 hitting percentage. Beckham added five kills with seven digs, while Ashton had four kills with two blocks and a .571 hitting percentage. Abbott posted nine digs in game three and Haskell recorded 18 assists with four digs and one block for the Tigers. Maryland was paced by DiLivio and Smith with five kills each. DiLivio tallied seven digs, while Huddleston posted five digs with 15 assists.

Individually for Clemson, Finn recorded a career-best 31 kills with a .394 hitting percentage and two blocks. Her 31 kills places her fourth in the Tiger record books for most kills in a match. Beckham recorded 25 kills with 25 digs, placing her in Clemson’s all-time 20-20 club, while Ashton added 15 kills with a .375 hitting percentage and a team-best seven blocks. Abbott tallied 24 digs and Haskell dished out a career-high 71 assists with 17 digs and four blocks for the Tigers

DiLivio tallied 20 kills with a .364 hitting percentage and 20 digs for the Terrapins, while Jones added 19 kills with 10 digs. Wagener recorded five blocks with 11 kills and Huddleston handed out 62 assists with 12 digs and five blocks for the Maryland

The Tigers will return to action on Saturday as they take on the Virginia Cavaliers in Charlottesville, VA. The match is scheduled to begin at 5:00 p.m.