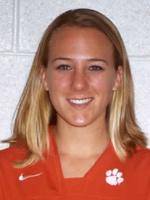 Clemson head volleyball coach Jolene Jordan Hoover announced the signing of a California standout to a National Letter of Intent. Dawn Robertson of San Diego, CA will join the Tigers in August of 2003.

“We are very fortunate to have Dawn join our program,” said Hoover. “She is a very talented player who is training with one of the best setters and coaches that our country has ever produced, USA Volleyball Hall of Famer Mary Jo Peppler. When she arrives in August, Dawn will be ready to compete for the job to lead a Clemson team that returns five starters.”

Robertson is a second team All-League selection and a second team All-CIF member. She earned two varsity letters in volleyball at Ranch Bernardo High School and was also named MVP of the team as a senior. The setter was named to the Union Tribune All-Academic Team in 2002 and was a member of the 2002 Redondo Beach all-tournament team. Robertson plays for the Coast Volleyball Club team and helped the team win the SoCal Junior Olympic qualifier in 2002.