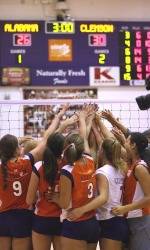 SAN DIEGO, CA – The Clemson volleyball team fell to San Diego by a 3-1 margin at the Jenny Craig Pavilion in San Diego, CA on Thursday night. The Toreros won a hard-fought first game, 26-24, and then defeated the Tigers, 25-18, in the second game. Clemson rebounded with a 25-21 victory in the third frame, but San Diego closed out the match in the next game, 25-17.

The Toreros lost just one senior from their 2007 squad that was ranked in the top 25 nationally.

The Tigers will remain in California for the weekend to take part in the 2008 Collegiate Beach Nationals. The event, which features a team-style format with each school fielding four teams of two players, will take place at Mariners Point in San Diego on Sunday, Apr. 20. Following the conclusion of the tournament, one school will be awarded the overall Championship. All six team’s in this year’s competition finished ranked in the 2007 CBS College Sports Network/AVCA Coaches Top 25 Poll, including No. 3-ranked USC, No. 5-ranked Nebraska and No. 6-ranked Texas.