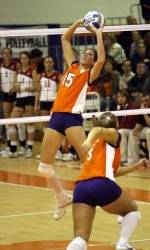 The Clemson (7-4) defense had a strong showing as well, holding the Rattlers to a .191 hitting percentage while posting 35 team digs and eight team blocks in the three-set match. Hepburn partnered with setter Didem Ege tallied a team-high 13 kills.

However, it was the Florida A&M offense that started strong, recording five kills in the first eight points of the match. Jovana Blazeski and Maria Gomez put their team ahead, 6-2, early in set one. The Tigers caught up quickly and took the lead for good at 12-11. The teams were within two points of each other until a kill by Brittany Fennell put Clemson on top 21-18. The Tigers then outscored the Rattlers, 4-2, to win the set by a 25-20 margin.

Proctor notched nine kills of her team-best 18 kills in the second set in leading the Tigers to a 25-20 win. Murphy guided the offense to 16 kills in the frame with just two errors for an impressive .519 hitting percentage. The teams were even through the first half of the set and the Rattlers led at 14-13. However, a five-point run on the service of Meghan Hinemeyer gave control to Clemson. Blazeski recorded back-to-back kills to bring Florida A&M back within one, but the Tigers limited the Rattlers to single points the rest of the way.

Hepburn and Proctor had played the first two sets without a hitting error, but each committed one to spoil a mistake-free match in Clemson’s 25-18 third set victory. The Tigers took an early lead in the frame and withstood a Florida A&M rally that cut the margin to just one at 12-11. They held off the Rattlers the rest of the way for the 25-18 win.

Samara Gomez led three players in double-figures in kills for Florida A&M (2-8) with 16. Blazeski posted 14 for the day, while Gomez added 12 in the effort.

The Tigers and Rattlers will battle a second time on Sunday afternoon to wrap up the 2008 Clemson Classic. Match time is scheduled for 1:00 pm at Jervey Gym.