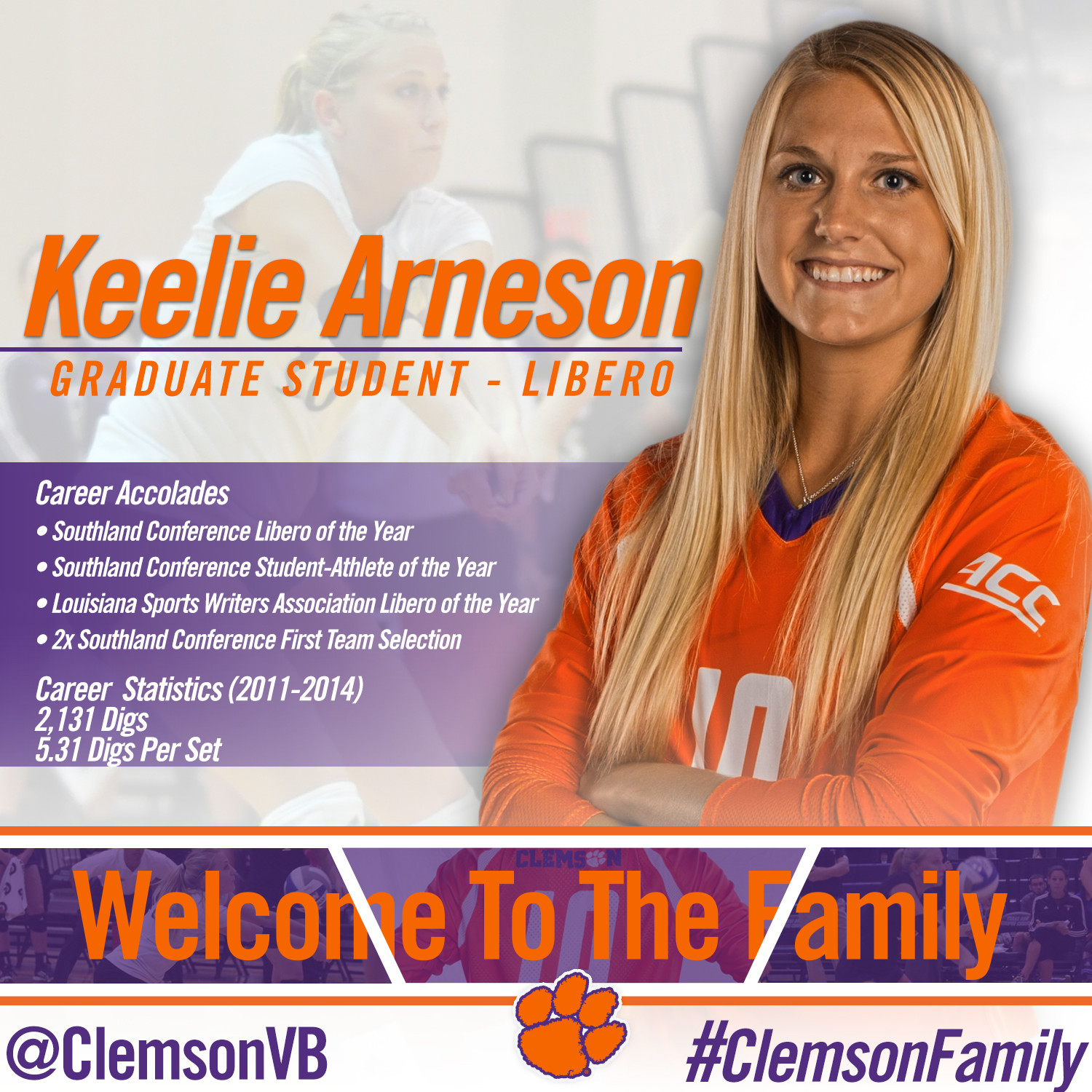 “Keelie is someone that we’re obviously very familiar with – having trained her over the course of the last four years at Northwestern State,” said Head Coach Hugh Hernesman. “We’ve known her since she was 16-years old and have had the pleasure of watching her grow into a complete volleyball player on the court as well as a dedicated student-athlete.”

Her 712 digs in 2013 is the 18th most ever recorded in a single season with the 25-point scoring format with unlimited libero substitutions. She ranked fourth in the nation as well that season, averaging 5.7 digs per set.

In 2014, she was on pace to blow away her numbers in previous seasons, recording 20 or more digs in seven of her 10 matches played. Five of those games she recorded 30 digs or more, including a career best 46 digs against Jacksonville State over five sets.

However, on September 26 Arneson believed her volleyball career was over after she suffered a torn Achilles that sidelined her for the rest of the season. She had 266 digs in just 10 matches and 39 sets, which amounts to an astounding 6.82 digs per set. The total was 118 more than she had in the first 10 matches of her dominant 2013 performance.

Luckily, the injury came one game shy of her not being eligible for a medical redshirt allowing her to compete in one more season. So when Coach Hernesman asked Arneson to join him in his journey to South Carolina, it was a no brainer for the Tomball, Texas native.

“It was a dream come true when Coach Hernesman wanted me to come to Clemson,” Arneson said. “I’ve always wanted to play at a big Division I school and I just felt like all of my prayers were answered and everything I went through was for a reason.”

When she visited in May she said it was the weight room that stood out to her the most and pointed out that Clemson’s nutrition station only makes it easier to spend most of her days in the weight room.

Arneson arrived in Clemson for open gym practices in June and said that Coach Hernesman’s family atmosphere was already set in place.

“I was really nervous coming in and seeing how they’d react. Especially since I’m coming in with Hugh and Steph,” Arneson said. “But when I got here we instantly clicked … I haven’t been her long and the freshmen just arrived but I feel like I’ve known them for months. We’re already a family”

She went on to add that some of the players expressed excitement to have the opportunity to play with her and that she’s excited to spend her final year competing in an elite volleyball conference.

“She simply makes everyone around her better and makes their jobs easier because she can clean up so many mistakes while neutralizing the opponent’s top offensive weapons,” Hernesman said. “Coming to the ACC is going to be a great challenge for Keelie and I know it’s one that she’s very excited about.  The competition drives her and it will be interesting to see how she performs at this level.”

Preseason practices in preparation of the season opener on August 28 begin tomorrow, Saturday, August 8.  Arneson begins the 2015 campaign on the cusp of breaking into the NCAA list of all-time digs leaders in the 25-point scoring format with unlimited libero substitutions. She currently has 2,131 in her career.