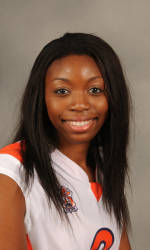 Sport: VolleyballYear: FreshmanHometown: Katy, TXMajor: EnglishFavorite Professor: Dr. Jonathan Beecherfield (English)Favorite Class: ENGL 190 (Intro. to the English Major)Athletic Highlights: Adeleye asserted herself as one of the frontrunners for ACC Freshman of the Year, leading the Tigers in kills and blocks in road wins at Maryland and Boston College over the weekend. Clemson has won five matches in a row, four of which are on the road, and Adeleye has led the Tigers in kills in each of those five matches. She posted 13 kills and six blocks in three sets against Maryland, hitting .524, and then had a career-high 23 kills to go with five total blocks in the Tigers’ 3-1 win at Boston College, propelling Clemson to their 20th win of the season. During the weekend, she averaged 6.71 points/set and accounted for 43.0 of Clemson’s 176 points (24.4%). She hit .550 for the weekend and had only three errors in 60 swings. She was voted Co-ACC player of the week in volleyball.