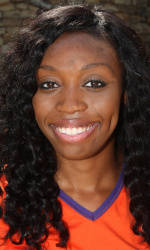 Sport: VolleyballYear: JuniorHometown: Katy, TXMajor: PsychologyFavorite Professor: Phil RandallFavorite Class: ENGL 314Athletic Highlights: On Friday, Adeleye recorded 19 kills in 33 attempts, three blocks and zero attack errors in a match where the Tigers hit .303 as a team and held Duke to just a .163 hitting percentage. On Saturday, she entered the night with 990 career kills after a big 19-kill effort on Friday, and continued her hot hitting against Wake Forest when she nailed 16 kills to push her over the career milestone. For the weekend, Adeleye posted 35 kills and hit nearly .500.