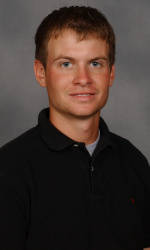 CLEMSON, SC – Former Clemson golfers Michael Hoey and David May both won professional golf events over the weekend. Hoey captured the European Tour’s Trophee Hassan Open in Agadir, Morocco on Sunday, while May won the Irish Creek Classic on the E-Golf Tour on Saturday.

There were similarities in both victories as both players started out their respective victories with over par rounds, then shot final round scores of 65 to clinch the victory.

It was the fourth career win for Hoey on the European Tournament, his third in his last 25 events. He won 250,000 pounds for his three-shot victory over Damien McGrane. Hoey, who played at Clemson from 1998-00 before returning to his native Northern Ireland, had rounds of 74-67-65-65 for his 17-under par winning score of 271. His 130 on the weekend was the lowest weekend 36 holes on the European Tour this year.

Hoey began the final round two shots back, but made birdies on the 14th, 15th and 17th holes to take control of the tournament. Hoey is now ranked 74th on the World Rankings, third among former Tigers. Kyle Stanley is 48th and Jonathan Byrd is 55th. Lucas Glover is 83rd and gives the program four former players in the top 100.

May finished with a 267 score for his four rounds at the event held a courses in Kannapolis, NC and Concord, NC. May was in 88th place after the first round and 11 shots off the lead. But, he had a second round 64 and followed that with rounds of 66 and 65 to win his first professional tournament.

May, who was the co-champion of the 2009 ACC Tournament, put the tournament away with birdies on the 14th, 15th and 16th holes in the final round. He made birdie on 16 when he holed a shot from a bunker.