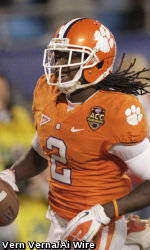 Watkins is Clemson’s leading receiver as a freshman with 77 catches for 1153 yards and 11 touchdowns. His yardage total is a Clemson single season record, while his touchdown total is tied for the Clemson record. His reception total is third best in school history.