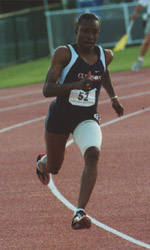 The USA Championships serve as the selection event for Team USA at the 2001 IAAF World Outdoor Championships, as well as for qualification for the World University Games. The top three athletes from each event who meet IAAF qualifying standards will be members of the 2001 U.S. team that will compete in the world Championships in Edmonton, Canada, Aug. 3-12. The top two eligible athletes from the USA Championships will represent the United States at the World University Games in Beijing, China, Aug. 27-Sept. 1. Those two athletes must be citizens of the USA, be between 17 and 27 years of age, be a currently enrolled student, or be a former student who graduated with a degree in 2000.