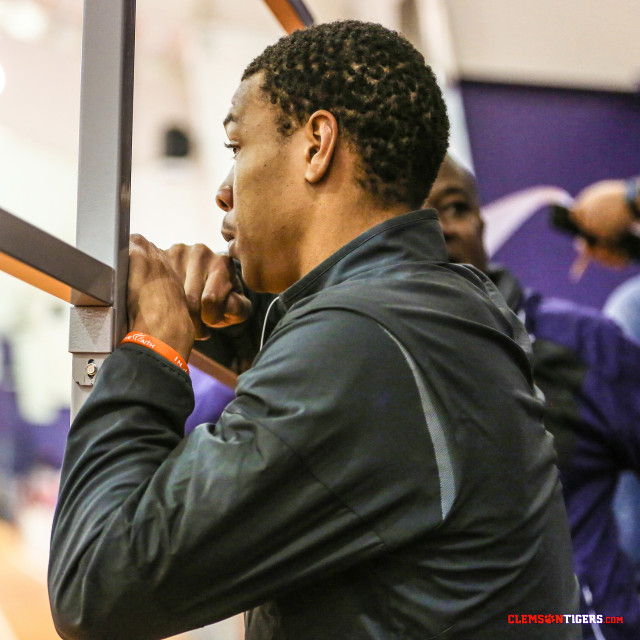 John Lewis, a junior on the Tiger track & field team, moved nearly 11 hours away from his hometown of Philadelphia, Pa., in 2015 to begin his college career at Clemson. As anyone could imagine, life as a young student-athlete is not easy at first, especially when home is so far away. When asked about the hardest adjustments he had to make since moving away from his parents, Lewis conceded keeping himself disciplined was hard initially.

“During my freshman year, I was not making the best decisions. I was staying up late, not eating right and not taking care of my body. When the season came, it was tough because I was running consistent times, but I knew I could do better.”

Having gone through his first college season, Lewis was much more confident he could balance his responsibilities entering his sophomore season. After training hard in the summer, he suffered a stress fracture in his foot, sidelining him from competition until February 2017. At one point, he even contemplated quitting the team due to all of the stress he faced.

“During that time, I was trying to decide whether or not to quit, or do I keep going. I just kept going, wanting to step up for the team. I was working hard to come back strong for the team. I came back and started running PRs.”

After placing fifth in the 800m at the 2017 ACC Indoor Track & Field Championships to earn his first career All-ACC honor, Lewis and the team quickly transitioned into the outdoor season.

But Lewis was up to the task. Mentally, he was ready, having ran his personal best in the 800m at Louisiana State just three weeks prior to the conference championship meet. Then, Lewis received the worst news of his life the day before he was set to compete.

“Last year at the ACC Outdoor Championships, I found out she died…my grandmother. She passed away the day before prelims. Seeing my dad cry, my parents cry and my brother cry before I ran was hard on me.”

Lewis’ parents traveled to Atlanta to watch him compete.

“I went to see my parents and saw my dad crying. He came up to me and told me that my grandmother died. I was shocked. I didn’t know what to do at the time because I had ACC Championships the next day, and then I see my parents shaken up like that. I tried to stay strong. And then I ended up running a PR.”

But for Lewis, the adversity he faced from the passing of his grandmother quickly evolved from an obstacle to a blessing that would change his life on and off the track.

“My grandmother was very big on having a relationship with God. So when she passed, I asked myself ‘What can I do to be more connected to her?’ So I started reading the bible more and praying every day, and keeping that as the centerpiece of my life, and just trusting in Him with everything I do. And it has been paying off.”

Ever since his grandmother passed, Lewis has worn a orange bracelet in remembrance of her and as a dedication to his faith that reads, “In Jesus name I play.”

“I wear it for every meet.”

Head coach Mark Elliott also noticed a change in Lewis, dating back to when he lost his grandmother.

“John Lewis is a very strong guy. He strives on great things and strives on any tragedy he’s endured in his life, irrespective of his grandmother passing. That was one of the bigger and more unfortunate events he’s faced.

“Once he got back from his injury last year, I saw a different kind of person in him. He’s more motivated to be great. His training got to the level where if everything sets up right, I know he’s going to run well. We saw that indoors this year, and we saw last year outdoors, too. And then he broke one of the records, which is a very stout record here in the 1000m.

“He is a guy who you want to go to war with. It doesn’t matter the adversity he’s faced. You can expect him to be at his best. You very rarely find that, and hopefully it doesn’t take tragedy for him to be successful. To me, the passing of his grandmother didn’t seem to affect him the way it would others. I can’t wait to see him compete for the rest of this season.”