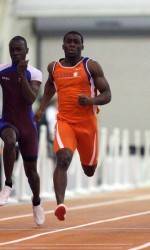 CLEMSON, SC – The Clemson track & field teams will travel to Blacksburg, VA on Friday to take part in the two-day Virginia Tech Invitational. The meet, which begins Friday at 5:00 PM, will be held at Rector Field House – host site of the 2010 ACC Indoor Championships next month.

The Tigers are coming off a successful weekend, when several NCAA provisional qualifying marks were attained. Brianna Rollins, a freshman from Miami, is the reigning ACC women’s Performer-of-the-Week. She won the 60m hurdles with a strong provisional NCAA qualifying time (8.25) last Friday. Rollins is slated for the hurdles again this weekend, in addition to several events.

The action gets underway with the women’s triple jump at 5:00 PM, as well as the women’s 60m dash. In the triple jump, Clemson’s No. 2 all-time triple jumper, Patricia Mamona, is slated to be in action. She will be joined by fellow jumps standout April Sinkler, who is entered in the high jump and long jump as well. Both of those events are scheduled for Saturday.

The men’s 60m dash will also be held Friday evening. Warren Fraser began his rookie campaign on the right foot, posting a 6.77 in his debut last weekend. He will be joined by sophomore Justin Murdock in the preliminary round.

The 60m hurdle prelims will follow on Friday and feature a number of newcomers, including two-sport athlete Spencer Adams. A former high school national champion, Adams is a safety on the football field for Dabo Swinney’s Tigers and a red-shirt freshman hurdler who sat out the 2009 season due to a knee injury. He will be making his debut in a Tiger track uniform Friday in Blacksburg.

On the track, the 300m dash, 500m dash and mile run will also be held Friday. In the field, the men’s triple jump and pole vault are both scheduled to start at 5:00. Xavier Tromp won the men’s vault at the Clemson Invitational last weekend in his first collegiate meet. An exchange student from France, he has one year of eligibility with the Tiger track & field program. Also expected to compete Friday will be Zach Berg, who has endured an injury-plagued career. Berg ranks sixth on the school’s all-time performance list in the 35-pound weight throw. Teammate Alex Padgett, also entered in the event, ranks third in Clemson’s record books.

Miller Moss gets the action underway Saturday with the men’s high jump at 11:00 AM, followed by the women. April Sinkler won the ACC high jump crown at the same facility a year ago. Both the men’s and women’s long jump are scheduled for 12:00 PM Saturday. The women’s pole vault will also be held at noon.

On the track, Clemson’s first running event Saturday will be the 800m run at 2:05 PM. Chris Slate and Jasen Turnbull are entered in the event on the men’s side for Clemson. The Tigers will have three runners total in the men’s and women’s 3K races, which begin at 2:50 PM. The final action of the meet will be the 4x400m relays, starting at 3:20. Clemson will field two teams in both the men’s and women’s races.