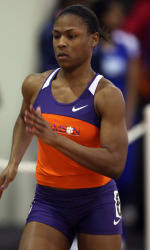 Note: Live results will be available at the following link once the meet begins:http://www.timinginc.com/results/clemsoninvite2012/

CLEMSON, SC – The Tiger track & field program will play host to a number of schools in the Southeast region on Friday and Saturday for the Clemson Invitational. The action is scheduled to get underway with the field events at 4:00 on Friday, followed by track events starting at 5. Saturday’s events start with field events at 12 noon, followed by track action at 1 PM.

The Tigers will only run a partial group of student-athletes this weekend, but will have competitors across a number of different events. On Friday, the action gets started with the jumps at 4 PM. Several freshmen could compete in the long jump, including area natives C.J. Davidson. At the same time, Torian Ware is slated for the high jump. Marcus Brown highlights Clemson’s entries in the men’s shot put at 5:00.

On the track, the hurdle preliminary rounds will be held at 5:00 (women) and 5:10 (men). Jasmine Edgerson and Keni Harrison are slated to compete in the women’s event, with Marcus Maxey and Charlton Rolle entered for the men’s high hurdles. The finals are set for 6:35 and 6:40, respectively.

Brown is one of two Tigers slated for the men’s 35-pound weight throw at noon Saturday, along with Cory Thalheimer. Following the men’s competition, Brittney Waller is expected to contend in the women’s 20-pound weight throw. Also in the field Saturday, Clemson will have a trio of females entered in the pole vault. Included in the entries is sophomore Christy Gasparino.

On the track Saturday, Clemson’s primary action will be in the mile run and the mile relays. Natalie Anthony from the women’s team and Ty McCormack from the men’s squad highlight Clemson’s entries Saturday in the mile. Anthony will run at 1:00, followed by McCormack and the men’s entries at 1:20. The mile relays conclude the event, beginning at 3:25 with the women and finishing with the men at 3:45.