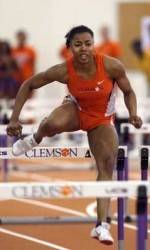 CLEMSON, SC – The track & field program will play host to the Clemson Games this weekend, a meet that will feature 12 schools and two full days of action. The meet gets underway Friday at 11:00 AM with the women’s pentathlon, followed by the start of the men’s heptathlon at 11:15. Regularly scheduled track and field events begin at 5:00 on Friday.

Patricia Mamona headlines a group of three competitors from Clemson in the pentathlon. She competed in the pentathlon at the NCAA Indoor Championships last season after earning automatic qualification following her total of 4,081 points at this meet one year ago. She ranks second in school history behind All-American Liane Weber, who will not compete this weekend. Linda Buchholz, who ranks third in school history, and exciting freshman Karine Farias, are slated to compete alongside Mamona.

Clemson will field just one entry in the heptathlon, which will include four events (60m dash, long jump, shot put, high jump) Friday and the final three on Saturday (60m hurdles, pole vault, 1000m). That competitor is Miller Moss, a junior who ranks third in school history in the heptathlon following his NCAA provisional qualifying performance last February at the ACC Indoor Championships.

For the first time this season, Clemson will compete several student-athletes in both the 200m and 400m dash events. The quarter mile will be held Friday at 7:30 PM, with the women’s group highlighted by La’Mont Jackson and Jordan Rispress. These same athletes are entered in Saturday’s 200m dash, with the addition of sprinters such as Kristine Scott, Michaylin Golladay and Stormy Kendrick from the women’s team, and Warren Fraser and Justin Murdock on the men’s side.

The hurdles have been vastly improved so far in the 2009-10 indoor season. Rollins, a provisional NCAA qualifier, and Golladay, third in school history, will compete in the 60 hurdles Friday afternoon at 5:00. On the men’s team, two-sport standout Adams has also qualified provisionally in the 60 hurdles. He headlines Clemson’s entries Friday in the men’s race (5:15 prelims).

Also on the track Friday, Clemson will field multiple competitors in the men’s and women’s 60m dash. Kendrick, a freshman from Gastonia, NC, is a provisional NCAA qualifier in the event. She and Scott will compete in the prelims at 5:30 Friday, followed by Murdock and Fraser in the men’s 60 prelims at 5:40.

Friday’s field event action features NCAA provisional qualifier Xavier Tromp, who cleared 17’7″ two weeks ago at Virginia Tech. The French exchange student moved into the No. 2 position in Clemson’s record books with that effort. He will jump at 6:00 Friday. At the same time, Alex Padgett and Zach Berg will look to continue their ascension through the Clemson record books in the weight throw.

Saturday’s regular track action starts at 2:00 PM with freshman Lauren Reen running the women’s 800m. Also in action Saturday will be Kim Ruck, an NCAA qualifier in the 3000m, and multiple Tiger entries in the men’s and women’s 4x400m relays.