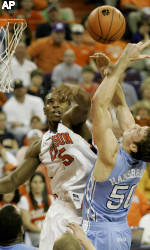 Ellington finished with a career-high 36 points, none more dramatic than his pullup jumper from the left side of the key with the clock winding down.

The Tar Heels leaped from the bench as Ellington pumped his fist in celebration.

Only moments earlier, Clemson freshman Demontez Stitt had hit two foul shots with 13.9 seconds to go that put the Tigers ahead, 88-87.

Instead, Ellington’s basket sent the Tar Heels (15-0) out of Littlejohn Coliseum with their seventh straight win over Clemson — and their top ranking in tact.

Ellington scored seven of North Carolina’s nine points in overtime. The sophomore surpassed his career high of 23 set earlier this season in a win over Ohio State.