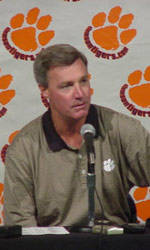 Head Coach Tommy Bowden met with the media on Tuesday to discuss Clemson’s upcoming game with Virginia. The coach discussed a variety of topics including Virginia QB Matt Schaub, Clemson’s running game and more. Click to listen to audio from the press conference.

On Virginia quarterback Matt Schaub: “I watched the South Carolina film (UVA’s only loss), so it’s pretty obvious what he means to this team. He was the conference player of the year last season. He’s a very experienced guy. If you bring heat, he’s seen it. He’s seen all the looks and all the angles. His leadership and confidence probably permeates throughout the whole team. I think we’ve seen what happens when he doesn’t play.”

On Saturday’s game being a must-win situation: “I don’t approach it that way with the team, because there are still seven games left. It’s an important game; it’s a big game. They’re bigger and magnified every week you play, especially in conference play. The players know how big this one is. There are two undefeated conference teams right now, and Virginia is one of them.”

On the injury situation: “Charlie Whitehurst and all of the guys that were injured will all be listed as day-to-day. None of them practiced yesterday. There’s a good chance some of them won’t play. Khaleed Vaughn is doubtful. They’ll all be limited in practice today.”

On the running game: “We’d been pretty good protecting Charlie up until the Maryland game. We had a couple of technique issues and some missed assignments, so we gave up a few sacks. I have to keep it in context. We got behind, tried to throw a lot, and then gave up a few sacks. That, of course, takes away from some running yardage. Was it good enough, no. I’m not trying to say that. But I don’t think we need a major overhaul.”

On the physical nature of the Maryland game: “The Maryland game was the most he’s been hit this year. We had two sacks on their quarterback, so we hit him pretty good as well. Charlie’s foot injury was not the result of one of their hits. It happened out of bounds. But it was not one of Charlie’s better games. He forced a lot of things early.”

On increasing the workload for Yusef Kelly: “We’ll find out this week how he’s coming along. He was our No. 1 tailback going into the spring. He came back overweight, then got injured. Then he got injured again. I’m hoping he’ll come back to how he was. Against South Carolina last year, he was pretty productive. He was very physical, broke some tackles, and got stronger as the game went along. We’re hoping he brings the same thing to the table that he did that day against South Carolina (last year).”