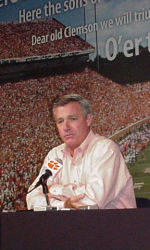 On past experiences playing Wake Forest: “They have the most unique offensive style in the conference as far as their option type plays. We saw a little bit of it last year, but I think they’re back into it heavier this because Ben Mauk (Wake Forest quarterback) got injured. They’ve led the conference in rushing a lot of the years that Jim Grobe (Wake Forest head coach) has been there. With us, it looks like they show up and play hard and execute. That’s where Jim (Grobe) has done a better job than I have in this particular game of getting his team to show up in the right frame of mind and to play hard.”

On Wake Forest Head Coach Jim Grobe: “I like his demeanor and how his team plays. I like the style his team plays. Based on a national survey I saw this summer, he’s one of the top-five coaches in the country that gets the most out of his players. I have tremendous respect for what he has done. He’s a very humble man.”

On Wake Forest’s 5-0 start: “I think they’re real good. I have always had a tremendous respect for them because of the problems they have caused us. They’re undefeated and it is hard to go undefeated. I think a couple of good indications are the Georgia and Ole Miss game last week, where Georgia struggled to win 14-9, and Ole Miss had the ball the last drive to win the game, but Wake Forest went there (Ole Miss) and won handily. Then I think about Iowa playing Syracuse and how they (Iowa) had to win in one or two overtimes and Wake Forest beats Syracuse 20-10. I think those are pretty good indications on how good his team is.”

On preparing the younger players for the Wake Forest game: “Our seniors have done a good job with making our younger guys feel a sense of urgency. At least our first five games have been a pretty good indication that they have encouraged our younger guys to show up. We’ve lost two out of the three to Wake Forest and they’re 5-0 this year. I think that is going to be a bigger factor even with our younger guys simply because I’ve got pretty good senior leadership. We’ve lost two out of three to Wake Forest , so it is hard to be overconfident. I think our players realize that. Even in the games we’ve won, we’ve been fortunate to win, so that gets your attention pretty well.”

On Wake Forest’s defense: “They lead the ACC in sacks and scoring defense, the most important statistic is scoring defense. They are doing some good things. They’re #1 in the ACC in scoring in the red-zone and they’re #1 in the ACC in red-zone productivity defensively. They blitz some, but when they do they play more of a zone concept behind the old zone blitz, then as far pure man-to-man, they’ve got guys to cover if something happens. They’re a very smart defense. They’re sound and they play hard.

On Clemson’s defensive front: “I think that is the #1 part of our success so far. As I’ve mentioned before and I’ve mentioned to our team, if we’re ever going to be a championship caliber team, then it has to be on defense, and it starts on the defensive front. We’re getting some pretty good snaps out of (freshmen) Etta Etta-Tawo and Etta Etta-Tawo, and Antwon Murchison, those freshmen and sophomores are carrying the bulk of the load. They’re playing pretty good.”

On running backs James Davis and C.J. Spiller: “It’s a high-profile position. Those guys are competitors and want the ball, and that’s what you want. You want guys that want a lot of carries and want the ball close to the red zone. Both of those guys along with Reggie (Merriweather), who is a stabilizing factor and is very mature, are doing well. Burton Burns, our assistant coach for the running backs, is doing a very good job.”

On the return of injured safety Michael Hamlin: “Hamlin should be a 100%. How much we use him will be up to Vic Koening (defensive coordinator). Hamlin’s a pretty smart guy, and it will depend on how comfortable Vic feels in playing him. He’s a pretty smart guy, very conscientious, and was out at practice a lot. He has been rehabbing, so hopefully he can be ready.”