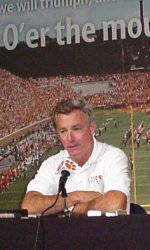 Playing in Charlotte: “It is much better. To play here close helps from a traveling standpoint and a fan standpoint. I’m real appreciative of the administration, whoever initiated getting the game moved to Charlotte. I had talked to their (Temple) head coach and he was in favor of it. I just want to encourage our fans to come out.

“Our fans have been great. We have struggled at Wake Forest the last two times we went and they still came back there this year.

Dealing with injuries and special teams problems: “We’ve had an unusual amount (of injuries) and the guys are so substantial. Rendrick Taylor (sophomore wide receiver), instead of getting a bruised arm or a sprained shoulder, he’s got a broken, arm and he’s out for the year. Etta Etta-Tawo (red-shirt freshman defensive tackle), instead of just having a cold or something to take him out a week to 10 days, he’s out for the season. He had played well in every game. Defensive linemen are really difficult to get. Those things can have a negative affect on a team as far as week after week after week, but our team so far from the leadership within has drawn together. We’ve performed pretty well. We went to Wake Forest and had four turnovers (on offense) against an undefeated team on the road and won the game.”

Team being susceptible to an upset: “Yes, they’re Division I-A. Montana State (who beat Colorado) was I-AA. Richmond shut Duke out and they’re I-AA. This (Temple) is a I-A team with 85 scholarships, and if we go out there unemotional with very little intensity and turn the ball over or if they return a kick and get good field position, then all of a sudden it’s a game. All of a sudden they (Temple) get a lot of confidence.

On the Gameplan against Temple: “We are going to do some things against Temple that we would do if we were playing Temple or Georgia Tech under the circumstances we’ve had with injuries at wide receiver with Chansi (Stuckey) and Rendrick (Taylor) out. So whether we’re playing Temple or Georgia Tech Thursday, for either one we would attempt to do what we’re going to attempt to do as far as distribution of the ball. Defensively, he’s (Temple Head Coach Al Golden) been playing a lot of young guys. I think they’re going to be enthusiastic.”

On win against Wake Forest: “We talk about the fact that we haven’t played our best yet. We rushed for 214 yards and they were giving up 78. They’re a really good run defense. We gave up four possessions on turnovers. If you get 20 yards per possession, then that’s 300 yards rushing against 60. That’s a better game, and when you play your best, that’s what you do. Defensively, we held them to 219 overall and 31 yards rushing. Just a couple of missed assignment and we could have held them to a little over a 100. We have not played our best in kickoff coverage, we haven’t in returning punts, so we go into every game saying play better than your last one.”

On freshman running back C.J. Spiller: “I think I saw him drop his first pass last night. He has unbelievable hands. I don’t know if Southern Cal knew it or not, but I could see why they recruited him so hard to replace (Reggie) Bush, who also had good hands. The Boston College game obviously cemented some facts. He showed consistency. It showed that he could do it (catch the ball) against a great defense instead of at practice with the scout team. He’s got tailback running skills and wide receiver hands.”

On defensive end Gaines Adams: “He’s done really well. He’s stepped up. He’s the sack leader in the conference and ninth in the country. After six games, it’s (causing a fumble and returning it for a touchdown against Wake Forest) been the play-of-the-year for us.”

On freshman wide receiver Jacoby Ford: “Chansi Stuckey might be the hardest practice player we have, and Ford is behind him. So he has been starting to mimic some of his work habits, which is really good in a young guy. He’s shown some things that let us know early that he’s ready to play.”

On the status of injured linebacker Tramaine Billie: ” I believe is going to try to attempt to play. I’m going to try and talk him out of it. He just got his pin out yesterday, so he will start light jogging today. He may start practicing next Monday. I’ll do my best to talk him out of it, but again only he and his family can make that decision. When they make a decision I will support it.”