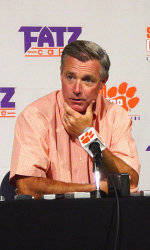 “I think it is going to be important for our crowd to be a factor in this game. It can be awfully difficult to operate at the line of scrimmage at particular times here. The Texas A&M game was extremely loud, and they had trouble communicating, even we had trouble communicating. I want to encourage our crowd to make it extremely difficult, and I don’t think there is anything unsportsman-like about that when they have the football, and tone it down a bit when we have the ball.”

“When I talked to my father, the very first thing he said, unsolicited, was that our crowd will be a factor. He mentioned that of all the places he plays at he hates this place because of the crowd noise. That needs to be a factor this weekend.

“From a personnel standpoint, we’re going to move Duane Coleman to cornerback. Duane is too good of a player to sit on the bench. He is a tough, hard-nosed guy that has practiced very well. He will move over to defense to try and help our team. He will bring a demeanor to our team that we like to have on defense.

“In evaluating our defense after two games, there is a level of effort that we have not reached yet. There is a standard that we have here and we want here that has not been achieved yet. I think it’s more so defensively than it is offensively. We have played two quality teams and we have beaten two quality teams, but again there is another level that this team needs to get to from a hitting and a toughness standpoint. I think it’s the whole team too, not just the defense.”

“When you play more zone like we do, I would have thought that we would have had more full speed collisions. As far as our offense on the goal line, we have not had much success there yet. We need to display a little more confidence in our head coach as far as running the ball when it’s a short down and distance down there on the one-yard line. Hopefully our backs and our offensive line will realize the type of demeanor we need to have down there on the goal line.”

“I think it will be very important in this game that we continue to play aggressively as we did last week. Against Maryland we did a good job of not getting unsportsman-like conduct penalties, we had to late hits, but those were close to the sideline. They were good calls, but they were not unsportsman-like penalties. This week, with two teams ranked in the top-20 there will be a lot of intensity, and it is very important that our team keep its composure, but at the same time be very intense and enthusiastic.”

“I watched our last game and the last defensive series we had freshman Phillip Merling in the game, freshman Rashaad Jackson, freshman Jock McKissic, and freshman Cortney Vincent when the game was on the line. We are playing a lot of young guys, and they have never been in this environment. I think this week we will focus on staying calm and composed and not getting out of hand.”