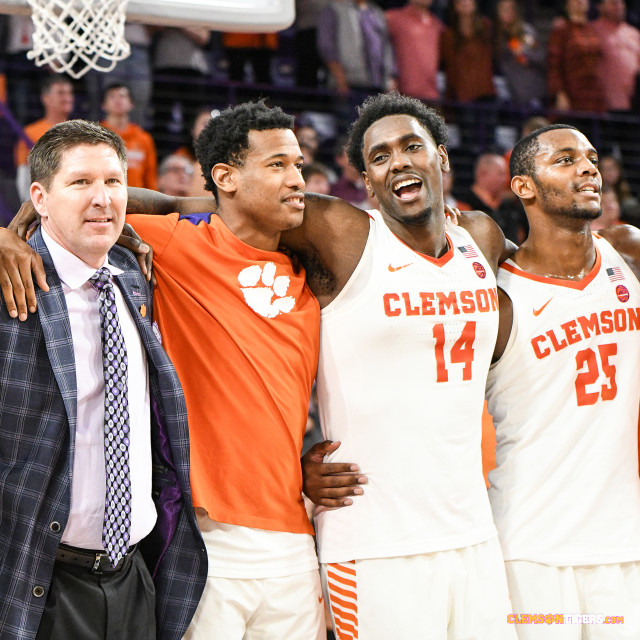 The Clemson men’s basketball team was in a celebratory mood after a come-from-behind 71-69 win over No. 22 Florida in a game played in Sunrise, Fla., on Dec. 16. Technically a neutral-site game hosted by the Orange Bowl, most of the 9,152 fans were rooting for the Gators, a reason they had a 14-2 record in this event heading into this season.

After 90 minutes of the two-hour plane ride home, walk-on Lyles Davisbegan to play some music on his phone, and many of his teammates were listening.

Some of them began to sing along, then someone had the idea to get a speaker and really have some fun.

“I don’t remember who came up with the idea of the speaker, but soon, everyone was joining, in,” said senior co-captain Donte Grantham with a smile.

The singing got louder and louder.

“We weren’t sure how coach (Brad) Brownell was going to react, so we turned the volume up a little at a time. When he didn’t say anything, we just kept going.”

And go they did for the last 30 minutes of the flight, all the way through the landing at the Anderson airport.

I have been traveling with Clemson basketball teams for 40 years, and I’ve never heard a team sing along with that many players.

At one point, all the “grown-ups” (coaches and administrators) in the front of the plane turned around to watch, and all had smiles on their faces.

“I loved it,” said Brownell in an interview nearly two months after the game.

“We have had talks about this year, especially with an older club. I have told them that years from now, you are going to remember singing on the plane coming back from beating Florida more than you will remember plays in the game.”

That said, there have been many memorable accomplishments on the hardwood so far this season. The Tigers won 14 of their first 15 games for the first time since the 2008-09 season, when Clemson won its first 16 games. There was the aforementioned win against Florida and the win at Ohio State in the ACC-Big Ten Challenge. Clemson trailed by seven points at the half in both games, then came back to gain resumé-building wins. Both of those teams are strong candidates to make the 2018 NCAA Tournament.

Additionally, there was the victory at home over South Carolina by 16 points, a road win over at Boston College team that could be NCAA Tournament bound and a five-point win over Louisville, a program that has had 15 consecutive 20-win seasons.

The most impressive victory in the first half of the schedule might have been the 72-63 win over No. 18 Miami (Fla.) on Jan. 13. The Hurricanes had five days of preparation for the contest, while Clemson had a Thursday-night game (9 p.m.) at NC State, giving the Tigers just a day and a half to prepare. The victory was just the fourth in the regular season over an ACC school with only one day to prepare for a top-25 team.

On Jan. 28, Clemson was ranked No. 17 in the coaches poll and No. 5 in the RPI. The Tigers were second in the ACC standings, uncharted territory for the program the last 10 years.

There are great stats to give the media tangible reasons for the success. The Tigers are playing efficiently on offense, including a high free-throw percentage that is on a school-record pace.

The improvement on defense is also noteworthy. Only six of the first 21 opponents scored as many as 70 points.

But if you talk to the players, and Brownell, it is the intangibles that are making the difference.

“I think our best attribute is how we get along on and off the court,” said Grantham, who suffered a season-ending injury on Jan. 20 but is still a leader in the locker room. “It is only natural that with a lot of teams, the players hang out with the guys in their same class or by position. But with this team, it doesn’t matter. There are no cliques. The freshmen hang out with seniors and the guards hang with the centers. We just enjoy each other.”

That bonding started in the summer, when the team took a trip to Italy in August. It is not a coincidence that the last time Clemson won 20 games in a season was 2013-14, when the Tigers totaled 23 victories and reached the Final Four of the NIT. That was the last year Clemson took a foreign trip (NCAA allows one every four years).

“There is no doubt that the foreign trip helped the camaraderie of the team,” explained Grantham. “When you take a trip like that and do things outside of basketball, it really brings a team together.”

The trip had an abrupt ending when there was a terrorist attack that made international news and took place right outside Clemson’s hotel.

In fact, Grantham was the last player outside doing some last-minute shopping and returned to the hotel just minutes before the attack took place in full view of the players from their hotel rooms.

“That was a terrible incident, but the whole thing brought us together. We all saw how the coaches really cared about us while that was going on. They went room to room to make sure everyone was OK, and we all gathered together as a team and staff. I won’t forget it.

“That experience also opened our eyes to not take anything for granted. At some level, it made us really appreciate the game and how much we enjoy playing.”

Brownell also sees the togetherness of this team as a reason the Tigers have had a great first two-thirds of the season.

“There is no question that this team has a great blend. The seniors spend time with the freshmen. They have given them good leadership. I can’t say enough about the job Donte and Gabe (DeVoe) have done in that area.

“Part of it is that Donte and Gabe really have enjoyed the Clemson experience. Their love for the place has spread to the rest of the guys. The guys who transferred here have now been here for a few years and have bought in. They all have a willingness to be coached, and when the older guys have that attitude, it carries down to the freshmen.

“It has all led to an energy and an enthusiasm. The freshmen have been great in that area also. They are all so coachable and willing learners about everything in the program.”

Clemson is on course to have something in common with one of the school’s greatest teams, the 1989-90 ACC champions. Tiger fans remember the combination of Dale Davis and Elden Campbell on the inside, players who led Clemson to a 26-9 record, the school’s only regular-season title and a trip to the Sweet 16 of the NCAA Tournament.

That team also had three players who were transfers (from junior colleges) in their second seasons with the program. Marion Cash, Derrick Forest and Kirkland Howling improved in their second season at Clemson and were significant reasons the Tigers finished in the top 15 of the AP poll that season.

Now we are seeing the same progress with second-year transfers in 2017-18. Shelton Mitchell, Marcquise Reed and Elijah Thomas are all in their second year on the court as transfers and are all starters who are averaging double-figure points.

Plus, Mark Donnal and David Skara, two savvy players who have already played in the NCAA Tournament, have made huge contributions on and off the court.

“Mark and David have been great additions to the team on the court and in terms of being good teammates,” added Brownell. “Their experience has helped so much, and they have set an example for the younger players.”

Entering late January, the Tigers had five players averaging double-figure points, something only two Clemson teams have done for the course of a season. It is an example of balance and ability to share the basketball that is a major asset for this team.

Togetherness on and off the court appears to be a formula that should lead to many trips home with players in full throat in the back of the plane.