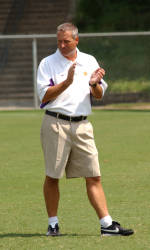 “I am happy we were able to recruit Todd and his family to Clemson,” said Bramble. “Having gotten to know him well through recruiting his players and observing how his teams played, he is going to be a great fit.

“I look forward to him stepping in right away and having an integral role in all aspects of our program. In addition to his on-field responsibilities in training and games, it won’t take him long to understand that Clemson is not a difficult place to recruit some of the nation’s brightest student-athletes in our sport. After all, that was one of the reasons he has chosen to move his family to our community.”

Shulenberger was the head coach of U16, U17, U18 and U19 girls’ teams for TopHat. His U16 team was the Georgia State Champion in 2006 and his U18 team won the state championship in 2007 and was the Region III Premier League runner-up in 2006. Also in 2006, his U17 team claimed the Region III Premier League Championship. He was an assistant coach for TopHat’s U16 team that was a national semifinalist, Region III Champion and Georgia State Champion in 2002.

In 2003 and 2004, Shulenberger was an assistant women’s soccer coach at Georgia State University in Atlanta. While working with the Panthers’ program, he prepared and conducted practices and assisted in games. He also performed many recruiting functions and organized the team’s travel.

Shulenberger also coached the Atlanta Fire Soccer Club’s U15 girl’s team in the Super Y League in 2003. That team won the South Atlantic Championship and was a national semifinalist.

Also in Atlanta, Shulenberger was the Director of Youth and Adult Soccer for the Carl Sanders Family YMCA from 1996-98. His responsibilities included maintaining the budget and fundraising as well as organizing summer camps, clinics, youth and adult programs and coaches and referee clinics.

Shulenberger graduated from Robert Morris University in Pittsburgh, PA with a degree in marketing in 1994. He was a member of the Colonial soccer team from 1990-94 and led the 1993 squad to an NCAA Division I Tournament appearance. Shulenberger played professionally for the Canton Invaders of the National Professional Soccer League (NPSL) in Canton, OH from 1994-96.

Shulenberger married the former Christy Walls in 2006. The couple has a 16-month old daughter, Kyla Christine.

“I would like to thank the Clemson Athletic Department, Head Coach Todd Bramble and Assistant Coach Tatum Clowney for this incredible opportunity,” said Shulenberger. “I look forward to working with Coach Bramble and the entire Clemson women’s soccer staff. I am excited to be coaching this talented group of players who compete in an extremely challenging conference.”