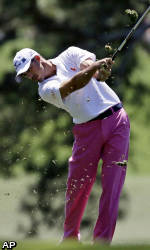 Byrd Finish Among Best by a Tiger in a Major * Jonathan Byrd finished the Masters with rounds of 72-71-72-75 for a 290 total. That ranks as the third best total score by a former Tiger in the Masters. The only 72-hole scores that are better are the 282 (-6) by Dillard Pruitt in 1992, and Byrd’s 288 (even par) when he finished eighth in 2003. Thus, Byrd has two of the top three 72-hole scores at the Masters by former Tigers. * As far as finishes are concerned. Byrd’s 27th place finish this week is the fourth best, trailing his own eighth place at the 2003 Masters, Pruitt’s 13th place finish in 1992 and Lucas Glover’s 20th place in 2007. * As far as any Major is concerned, Byrd’s 27th place finish is the 13th best by a former Clemson golfer. As stated above, it is the fourth top 30 at the Masters. There have been three top 30s at the British Open, four top 30s at the US Open and two top 30s at the PGA. This was Byrd’s fifth top 30 finish at a Major, second behind Lucas Glover’s six top 30 finishes in Majors. Both Glover and Byrd should have many more chances as they are both under 35 years of age.

Byrd By the Numbers * While Byrd was disappointed in his final round 75 on Sunday, his two over par finish for the week was better than number-one player in the world Luke Donald, 2011 Fed Ex Cup Champion Bill Haas, defending US Open Champion Rory McIlroy, defending Masters Champion Charl Schwartzel and four-time Masters champion Tiger Woods. His 290 total was the same as defending PGA Champion Keegan Bradley and rising PGA Tour star Rickie Fowler. * In fact, a look at the final results shows that Byrd finished better than seven of the top 10 players in the World Golf Rankings entering this week’s play. The players he defeated were #1 Donald, #2 McIlroy, #5 Steve Stricker, #6 Martin Kaymer, #7 Tiger Woods, #8 Charl Schwartzel, and #10 Webb Simpson. * Byrd is Mr. Consistency on the PGA Tour and you can see that in his cumulative scorecard for the week. His worst hole for the four rounds was the par four, 505-yard 11th, a statement many players could make. He was two over par for that hole. His best hole was the par five 13th where he made three birdies and one par for a three under par total. * He was even par for the week on nine of the 18 holes and was one under for two holes. For the week he took 145 shots on the front nine and 145 shots on the back nine for a 290 total. * Byrd finished the week with 12 birdies, three on the 13th and one each on nine other holes. So he had at least on birdie on 10 different holes. * Byrd had an average driving distance of 278 yards for the week, hit 43-56 fairways, 18th best in the field, and 41-72 greens in regulation.

According to Byrd “I didn’t play very well today. I just couldn’t get any rhythm going. I had a good shot into number-one and had a makeable birdie putt (from 8 feet) and missed. Then on two I had another makeable opportunity and missed. Then I was in great position off the tee in three and didn’t make birdie.

“Sometimes I hit my irons too far and sometimes I was short. I flushed an iron at number-11 and it went over the green into the water. I did get up and down a few times, but overall it was a ho-hum day.

“But I also take away so many positives. As I finish I am 28 (ended 27th) on the leader board at the Masters. That is not bad and it will be more positive as time goes on. It has been a great week here, a great experience.”

Shot of the Day Jonathan Byrd shot of the day was his final shot, a chip-in on the 18th hole from about five yards off the green, a shot of about 30 feet total. For the second time this week he made a club change just before his swing and for the second time it resulted in a good move, as he made birdie. He also changed clubs before a fairway shot on number-seven on Saturday.

“I thought about a lob wedge first, then when I looked at the grain of the green, I decided to go to the 54 degree.” The decision was a good one as he registered his first chip-in of the Masters and his first birdie on the 18th hole this week.

Byrd had gotten to that spot with a terrific drive right down the middle, a drive that many of the leaders will wish they had coming to the final hole. But, his second shot was well short. But, he made up for the mistake with the chip-in.

Jim Byrd was a wonderful man who passed a way from a brain tumor in 2008. He first suffered difficulties while attending the Clemson vs. Virginia Tech football game during October of 2007. I probably knew Jim Byrd better than any other parent of a Clemson student-athlete in my Clemson career. We traveled to Scotland on a week long golf binge with 36 others, and sat in back to back seats for virtually the entire trip.

While Jim Byrd was a North Carolina graduate and former Tar Heel football player, he loved the Clemson program and was a guiding light to sons Jonathan and Jordan Byrd. Those two have had quite an impact on the Clemson golf program. Jordan is now associate head coach under Larry Penley and could not watch his brother play on Sunday as he was traveling to Houston to catch up with the Clemson golf team that begins play in a college tournament on Monday.

This year’s Jim Byrd Memorial Clinic will be held April 16-17 at Woodcreek and will feature professionals Tom Lehman and Davis Love III.

The Jim Byrd Memorial Clinic is hosted annually by Fairway Outreach. The clinic gives youth the opportunity to watch and learn from some of the best players on the PGA Tour, PGA Teaching Professionals and other Influential individuals in the game of golf. Participants listen to players talk about golf, life on the tour and their Christian faith.

Masters Roars This was the third time I have been to the Masters on Sunday. The first time was very memorable, as it was the 1986 Masters. What an experience to see Jack Nicklaus with his final Major at age 46. When he made that putt on the 17th hole I was standing right under the camera tower, so the video you see is the angle I had. I also came for the 1990 Masters when Chris Patton made the cut as an amateur.

Today I heard two roars two hours apart that rival the roars the Golden Bear caused in 1986. The first came when Jonathan Byrd was on the second green. Bo Van Pelt made a hole-in-one at the 16th green and we weren’t that far away.

Then with Byrd and fellow competitor Jim Furyk playing the ninth hole, the roar’s reverberated like I have never heard before as Louis Ooshuizen made a double-eagle, an albatross from 253 yards out on the second hole. It was just the fourth double-eagle in Masters history, the first since 1994 (Jeff Maggert on the 13th hole). The only other double eagles have been recorded by Bruce Devlin on #8 in 1967 and Gene Sarazen on #15 in 1935.

Doesn’t Get Much Better Than This Hope you enjoyed reading this week’s Masters blog. My thanks to Steve Ethun, the media coordinator for the Masters, for allowing us to report on the four Tigers in the field this week.

This is my 34th year covering Clemson golfer and this ranks as the second most exciting week of golf I have had from a journalistic standpoint.

Second? How can the Masters be topped? The 2003 NCAA Tournament of course, when the Tigers won the National Championship at rival Oklahoma State. Hope we can do that again some day.