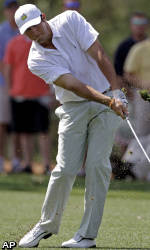 Corbin Mills by the Numbers * Mills finished with a 155 total (74-81) for his two rounds, ironically, the exact same total Ben Martin had two years ago. Martin and Mills were teammates on Clemson’s 2010 team that finished second at the NCAA Regional near Atlanta and 16th in the nation at the NCAA national tournament at the Honors Course in Chattanooga, TN. * For the two rounds, Mills was a combined +2 for the four toughest holes on the course according to statistics for the first round. Mills played the first hole in one-over-par and it is rated as the toughest hole on the course. He was also +1 on the 11th hole, even on the 18th and even on the fourth. * Mills averaged 269.75 yards per drive for the two rounds, hit 18 of 28 fairways and hit 19 of 36 greens in regulation. Greens in regulation tell the most about a player’s score and that was the case with Mills. He hit 13 of 18 greens on Thursday when he shot a 74 and just six of 18 green on Friday when he shot an 81. * Mills did not have trouble finishing nines. He was -1 for the eighth and ninth holes combined and -1 for the 17th and 18th holes combined. He was +2 for the two rounds at Amen Corner. He could have gotten through the three-hole stretch (11-13) at even par had he not double bogeyed the 13th hole on Friday. * Jordan Byrd wore caddy vest number-seven this week, but Mills only had one seven on his scorecard for the 36 holes he played in the tournament. That came at the par five 13th hole on Friday when he had to take an unplayable lie after a tee shot found the woods. He had just two double bogeys for the two rounds.

Shot of the Week Mills best shot of the week came on Friday when he hit his tee shot with a pitching wedge on the 12th hole to within five feet of the hole. He then made the putt for a birdie two. There are a lot of pros who would trade for that shot on Sunday afternoon.

“That had to be my best shot of the week,” said Mills. “I hit a pitching wedge and it was right on it.

“I made double bogey on the 13th hole, but when I walked up the 14th after hitting my drive (in the middle of the fairway), I said to Jordan (with a smile) at least I birdied 12. That was a shot I will remember for a long time.

No Breaks in the Weather Mills did not get a break in the weather on Friday. He offered no excuses after his second round when he met with the media, saying, “I just didn’t hit it very well today.”

The sunshine finally came out when Mills was preparing to hit his tee shot on the 18th hole. Despite the cool temperatures, Mills took off his blue pull on the 14th hole and sported a Clemson orange golf shirt for the remaining holes. I could not have blamed him if he kept the pull over on. It was cold and windy. But, he obviously wanted to show his Clemson colors.

Mixed Bag on the Short Game Mills will be the first to tell you that he had some errors in his short game today. On the par five 8th and par five 15th he was in good shape just 30 yards from the pin in two. But, he could not get up and down to make birdie.

However, he got up and down out of bunkers three times in the round on Friday. He did it for the second straight day on the difficult seventh hole to make par. Kyle Stanley would have loved to do that as the former Tiger made double bogey on the seventh hole both days. Mills also got up and down out of the bunker on the ninth hole and the 17th holes. So his sand save percentage might end up among the best in the field after two rounds.

Quotes from Corbin Mills “I didn’t hit it well today, but I had a great time doing it. It is not often that you say you had a good time shooting 81, but I did today. I didn’t really get caught up in what I was scoring, I just enjoyed the moment.

“You can’t really get down on yourself whenever you’re in my position (playing the Masters). You’ve got to soak it all in and try and take as much from it as you can, and I think I did that.

“I felt I would play well today. I felt fine physically. I think I got off to a bad start and didn’t really get down on myself, it just wasn’t there today.

“The entire experience was special. I didn’t really have a lot of expectations on how I was going to play, but I knew all the history behind it as far as the golf course and the tournament.

“I’m not going to get down on myself. I am going to learn from this and hopefully next week (at the Heritage) will be better. I think its going to be a lot more laid back. This was a good test. I feel good.

“Next week I will play at The Heritage, then it is back to college golf. I am excited to get back to playing for Clemson. This is a great stretch for me. I am really looking forward to the ACC Tournament. I have played well at the Old North State Club. The course sets up well for me.

Mills next tournament for Clemson is the ACC Championships at The Old North State Club in Uwharrie Point, NC, April 20-22.

Masters Food The cost of Masters food is legendary. If you can just get a ticket to the tournament you can take advantage of great prices. I ate lunch for $3 both on Thursday and Friday, a turkey sandwich and glass of iced tea on Thursday, and an egg salad sandwich and lemonade on Friday.

Byrd will make the cut easily and was in the top 20 as of 4 PM with a score of 143, one under par. Two players who have won the Par Three Contest have finished second at the Masters, Raymond Floyd in 1990 and Chip Beck in 1993.

Byrd by the Numbers * Jonathan Byrd had a round of 71 on Friday after his opening round 72 and will make the cut at the Masters for the second time in his professional career. This is the second time he has made the cut at the Masters. He also made it in 2003, his first year in the tournament when he finished eighth with an even par 288 score. That is still the best finish by a former Tiger at the Masters. * Byrd was on pace to record the best round at the Masters by a former Tiger in 20 years, but he made bogey on the 18th hole, which was playing into a very strong wind at the time. No Clemson golfer has shot a 70 or better at the Masters since April 12, 1992 when Dillard Pruitt shot a 69 in the final round. * Pruitt by the way had the best tournament by a former Tiger in terms of score. At the 1992 Masters the 1984 Clemson All-American had rounds of 75-68-70-69 to finish with a 282 score, six-under-par. He finished 13th for the event overall, earning a return trip for in 1993. Pruitt owns the top three rounds by former Tigers at the Masters. * Pruitt won $26,500 for that 13th place finish in 1992. Last year, 13th place would have paid about $180,000. * Byrd tied his career best at the Masters on Friday. At the 2003 tournament he had rounds of 74-71-71-72 in finishing eighth. So Friday he tied his previous best of 71 set in the second and third rounds that year. * While former Tigers have had just four rounds at 70 or better at the Masters, Byrd’s 71 on Friday was the eighth round of 71. The last former Tiger to score under par was Lucas Glover, who had a 71 in the Friday round last year.

Cell Phone Motivation One of the motivators for Byrd this week has been his cell phone screen saver. He installed a picture of himself hitting a drive on the 17th hole at the 2003 Masters, the only previous Masters he made the cut. “Every time I have looked at my phone I see a picture of myself playing in that tournament and it reminds me of the year I made the cut.”

Well, it has worked as Byrd has made the cut at the Masters for the first time since that tournament and for the first time in a Major since the 2007 British Open at Carnoustie. He had missed the cut in seven straight Majors, including all four last year.

Big Week for Byrd A week ago, Jonathan and his wife Amanda welcomed their third child into the world. Kate Byrd was born on Friday, March 30, 2012.

Now he has made the cut at the Masters for the first time in nine years. All that after last fall when he was inducted into the Clemson Ring of Honor, just the second Clemson golfer to make it, and finished a career best 22nd on the PGA Tour money list.

Jordan Byrd Can Be Full Time Fan This Weekend While we know he wanted Jonathan Byrd on Saturday and Sunday. Jordan Byrd is Clemson’s Associate Golf Coach and served as Mills caddie this week. But, with Mills missing the cut he is free to watch his brother play on the weekend.

Former Clemson Linebacker Runs Scoreboard Former Clemson linebacker Randy Cheek is one of the press room workers who is in charge of the large, detailed scoreboard in the press room. Cheek came to Clemson from Augusta, GA in the 1970s and was a member of Clemson’s 1981 National Championship team. He now lives in Clemson where he has an insurance company, but comes back to his hometown every year to work in the press room. He has done it since the 1986 Masters when Jack Nicklaus won his final Major.