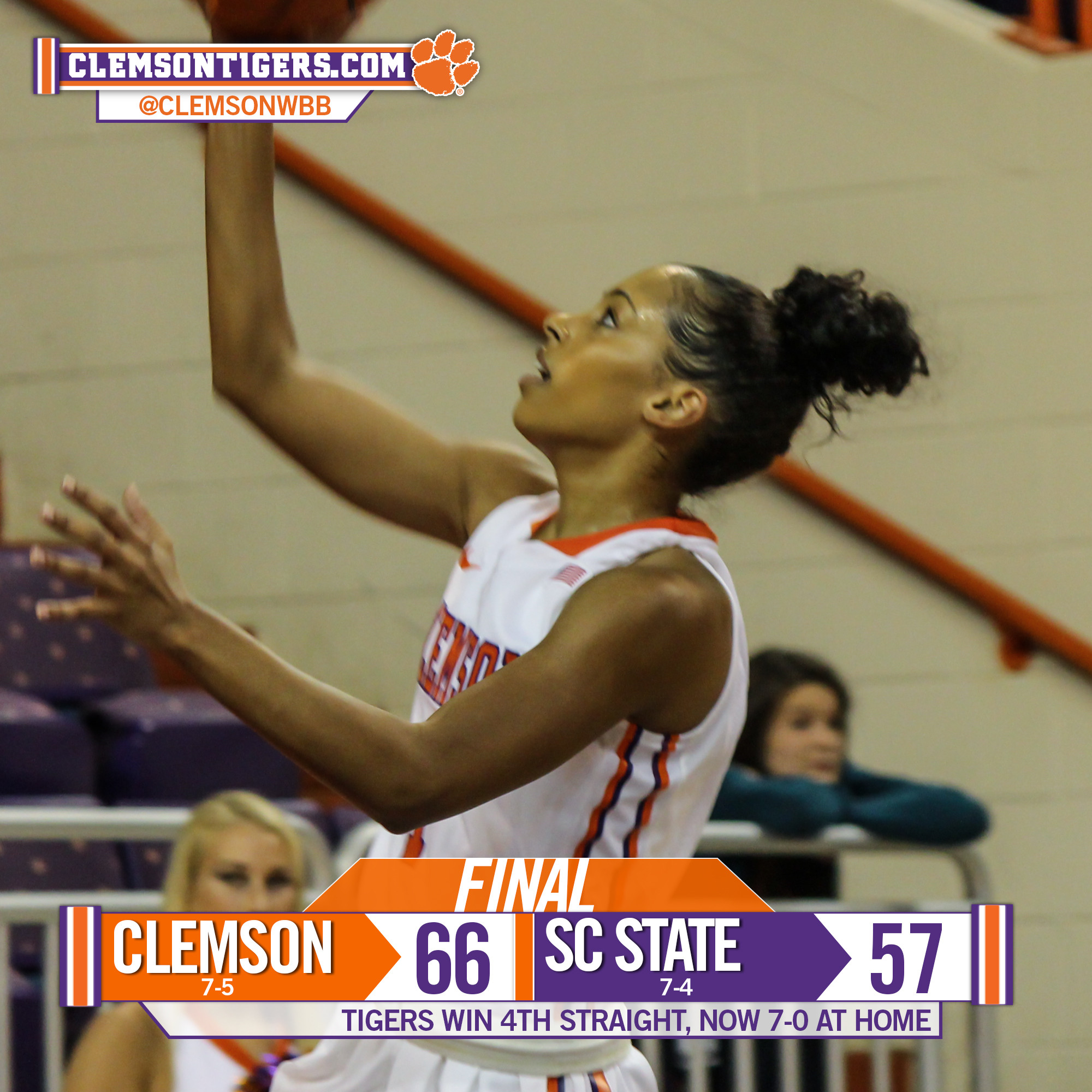 CLEMSON, S.C. – Tiffany Lewis scored a career-best 16 points and Nikki Dixon tallied her second double-double of the season (13 points, 11 rebounds) as Clemson defeated SC State (7-4), 66-57, to win its fourth straight game heading into the holiday break. The Tigers (7-5) have opened the season 7-0 at home, its best start in Littlejohn since 2001-02.

Clemson is in the midst of its first six-game homestand in school history, and has made the most of it, winning the first four.

The Tigers finished with a positive assist-to-turnover ratio for the third straight game, and had just 12 miscues on Sunday in improving to 15-4 all-time against the Bulldogs. Clemson launched 28 three-pointers, the third-highest total in team history, and made nine. Lewis was the key contributor, hitting on four of her 11 attempts from behind the arc.

Clemson’s bench tallied 32 points in the contest, half of which came from Lewis, its eighth game this season with 30 or more points. Francesca Tagliapietra had nine (4-7 FG), while also adding five rebounds, two assists, and two steals.

After a slow start in the first ten minutes, Lewis hit a three to give Clemson a 9-8 lead with 10 minutes to play in the half in what would be the final lead change of the game. It opened what would be come a 12-0 run, to take a ten-point lead. After a pair of SC State scores, another 9-0 Clemson run pushed the lead out to 14 just before halftime. Clemson went into the half ahead, 29-16, after committing just three turnovers.

The Tigers opened the second half stretching the lead to 17 before the Bulldogs made their run, cutting the deficit to just five at 43-38, with 8:36 to play. However, four Tigers scored during a 16-3 run over the next five minutes to grab a 59-41 lead with 3:36 to play.

Clemson will break for eight days before returning to action in Littlejohn on Dec. 29 at 1 p.m. against NJIT. If the Tigers can pull that one out, it would match the best home start since the 1997-98 team won all 13 of their home appearances.

“We did a great job rebounding in the first half. We’re shooting the ball very well from the free throw line and I’m glad we were able to pull out this victory.”

“I’m glad (Tiffany) Lewis stepped up and had a good game. She knocked down some big threes for us down the stretch. (Nikki) Dixon is always steady, doing a little bit of everything for us. Her double-double was huge today, and I’m proud of the way they came out and played today.”

-Tiffany Lewis scored a career-high 16 points against South Carolina State, surpassing her previous high of 12, which came this season against North Dakota. She also had career-highs in field goals made (5) and field goal attempts (12).

-Nikki Dixon (13 points, 11 rebounds) earned her second double-double of the season, and now has four double doubles for her career. She was one rebound off a career-high

-The Tigers forced 16 turnovers against the Bulldogs and scored 22 points off of their turnovers and 12 fast break points. They also came away with four blocks and eight steals.

-Clemson had a positive assist:turnover ratio for the third straight game, and is 41:35 over that span