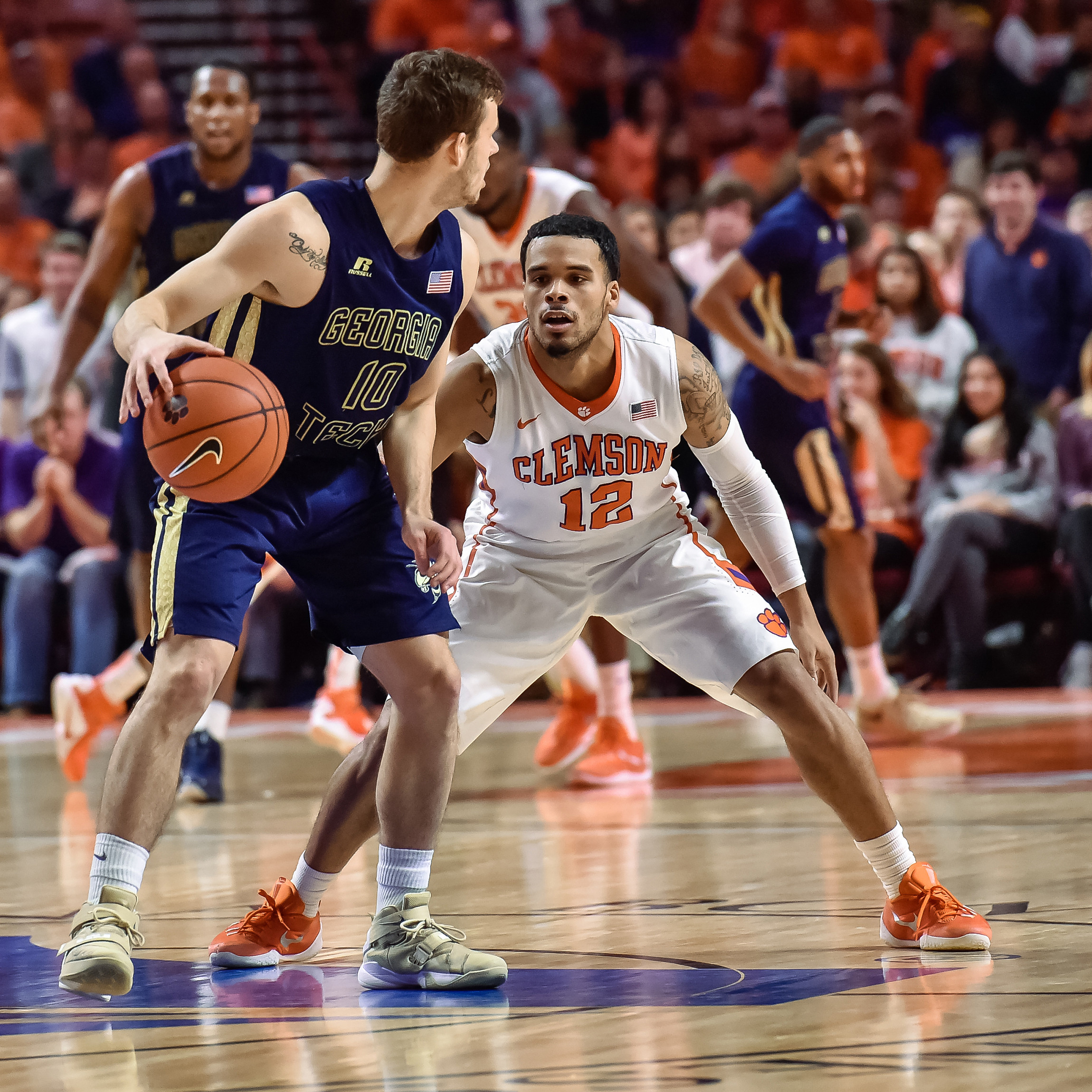 Clemson finished the regular season by earning the program’s fifth 10-win ACC season in school history, tying for seventh in league play despite being picked to finish 12th by ACC media. The Tigers (17-13, 10-8) now get set for their ACC Tournament matchup against the Georgia Tech Yellow Jackets (18-13, 8-10) on Wednesday, March 9.

The Tigers and the Yellow Jackets split their regular season series 1-1, as Clemson took the first game in Bon Secours Wellness Arena, 66-52, while Georgia Tech escaped with a 75-73 victory in Atlanta. Entering the ACC Tournament, four of Georgia Tech’s starters average 10 points per game or more overall, with guards Marcus Georges-Hunt (16.6 ppg) and Adam Smith (14.6 ppg) leading the pack. Since their loss against Clemson, Georgia Tech rebounded to win five of its last six games.

Clemson has had plenty of success against Georgia Tech under head coach Brad Brownell, with the Tigers winning 12 of the last 14 matchups against the Yellow Jackets. Clemson is led by Jaron Blossomgame, who leads the Tigers in scoring with 18.6 points per game overall. He posted the third-best scoring average in league play with 20.7 points per game en route to First-Team All-ACC honors and the ACC’s Most Improved Player award.

Landry Nnoko was also named to the All-ACC Defensive Team by the league’s 15 head coaches, amassing 71 blocks over 30 games, with a career-best eight blocks at Virginia Tech, the most by any ACC player in a game this season. Heading into the tournament, Nnoko is fifth in Clemson history with 212 blocks over his career.

IN THEIR OWN WORDS

On making First-Team All-ACC and receiving Most Improved Player:

“It’s a pretty big deal for me. Making First-Team All-ACC was one of my goals for this season and I’m happy to have accomplished that. It means a lot considering what I’ve been through with the injuries, and it took a lot of hard work to get here. I remember my freshman year, after re-injuring my leg, I was wondering if it would ever pay off. I worked so hard to get back on the court, and then another leg injury. I was really down on myself for a bit, but I didn’t let that stop me. I fought back, got healthy, worked really hard the last two offseasons, and it’s helped me get to where I am today.”

On facing Georgia Tech in the tournament:

“We’ve been playing well as of late, and I feel good about our chances. Boston College was a good game for us to bounce back and play well heading into the tournament. We had guys like Donte (Grantham) and Avry (Holmes) step up, so it’s good to see that heading into the tournament. We’re good enough to show we can play with the best and beat the best, so we have to have a steady mindset and be consistent and believe in our ability moving forward.”

On entering the ACC Tournament on a high note after the BC win:

“It helps give us confidence heading into the tournament. We feel like we’re playing at a good level right now.”

“It means a lot. Great players have come through Clemson, and to be a part of that list helps me feel better about my game and the work I’ve put in these past four years.”

On keys to success in the ACC Tournament:

“We just have to play together and play for each other. Coming together and playing hard … we can play at a high level. All the games that we’ve played we’ve always fought until the end. I think we have a really good chance in the tournament because of how hard we played during the year. We all have that determined spirit Coach (Brad) Brownell talks about all the time, and I feel that we can turn some heads.”

On Blossomgame’s accomplishments this season:

“Really proud of him. Jaron has had an outstanding season. He was very efficient shooting the ball for us this year, particularly from three. We knew he was going to take a big step this year, and I’m just happy for him because I know how hard he worked at it. To play at the high level he did in ACC play speaks to the quality of player he’s been for us all year.”

“We have to be more mentally tough on the road. Offensively, I think we’ve played pretty well throughout most of ACC play, and I think our guys played with pretty good confidence. I’m confident our guys are excited and will be able to play well.”

“It’s a tough matchup. Adam Smith is an outstanding shooter. They’ve got good post players who are older and big-bodied that can score inside. They’re a talented offensive team because they have a lot of different weapons, so you can’t just focus on one guy. Marcus Georges-Hunt is certainly going to be a challenge for us.”

On his team’s ability to matchup: