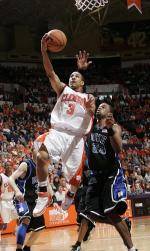 Vernon Hamilton is coming off a week in which he had acareer high 21 points in the victory over Wake Forest, followed bya career high 31 points in the loss to #1 Duke. For the year,Hamilton is now shooting 50.3 percent from the field. One oneClemson starting guard has shot 50 percent or better from the fieldsince the 1987-88 season. It was also the most points by a Tiger inthe Oliver Purnell era. As a team, Clemson shot 54.1 percent fromthe field, the best percentage against Duke since the 2003 ACCTournament (90 games ago) when Virginia made 57 percent of itsshots. Clemson shot 54 percent from the field, committed just 13turnovers and won the rebounding by seven in the loss to Duke. Theproblem was free throw shooting as the Tigers made just 6-21charity tosses for 28.6 percent, worst by a Clemson team in nearlyfour years. Shawan Robinson scored 17 points and made threethree-point goals against Duke. He moved into third place onClemson’s career three-point goal list in the process, moving pastChris Whitney. Robinson now has 170 for his career, three ahead ofWhitney’s total between 1991-93. Robinson needs 27 points to reach1000 for his career. Clemson has a +3.29 urnover margin, fourthbest in the ACC and a figure that would rank third best in Clemsonhistory for a season. Clemson is forcing 18.9 turnovers per game,second best in the ACC and at a pace to rank fourth best in Clemsonhistory over a season. Clemson’s 11.06 steals per game rank aheadof the single season record of 10.89 set in 1976-77. Miami (FL)swept Clemson in a pair of close games last year. The Hurricaneswon by four in Miami and by six at Clemson. Still, Clemson has a5-3 lead in the series. Clemson has lost four games this year by atotal of 24 points with no loss being more than 10 points. The mostClemson has trailed at any point of any game this year is 12against Elon. Clemson ranks in the top 25 in the nation and leadsthe ACC in both blocked shots (21) and steals (5). Clemson was theonly team in the nation to rank in the top 20 of both categorieslast season. Clemson also leads the ACC in offensive rebounds pergame at 15.0. The leader in that area is Akin Akingbala, who ranksseventh in the ACC. Clemson 6-5 freshman K.C. Rivers is averaging5.5 rebounds per game, second best among ACC freshmen. He is alsofifth in assists per game among league rookies. Hamilton leads theACC in steals with 2.59 percent. He has more steals than fouls(44/40) this year.