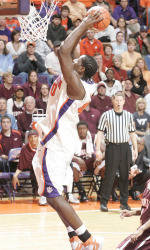 CHARLOTTE, N.C. (AP) –James Mays scored 15 points and Clemson overwhelmed Boston College with its full-court press, cruising to an 82-48 win on Friday to reach the semifinals of the Atlantic Coast Conference tournament for the first time in 10 years.

After a sluggish start, the Tigers (23-8) made life miserable for the Eagles, who often had trouble getting the ball across midcourt. Boston College (14-17) committed 22 turnovers a night after the 11th-seeded Eagles stunned Maryland to keep their season alive.

Raymond Sykes added 12 points for the third-seeded Tigers (23-8), who earned a matchup with No. 7 Duke on Saturday thanks to the largest margin of victory in its checkered ACC tournament history.

Sticking around for the weekend is an unusual experience for the Tigers, who were 14-54 all-time entering the night and are the only charter member of the league never to win the tournament title in its 55-year history.

Another difficult task looms since Clemson has also lost 22 straight games to Duke. But the Tigers’ roster of springy forwards and speedy guards has put them in position for their first NCAA tournament bid since 1998.

BC top scorer Tyrese Rice had to work for his 15 points on 6-of-13 shooting. His young teammates gave him little help, as the Eagles closed the season with 13 losses in 15 games and were no match for Clemson’s relentless pressure.

Clemson, holding its highest ACC seed in 18 years, looked nervous early, missing its first five shots in falling behind 6-0. But after the shots started falling and the Tigers could set up their press, it was over quick – as in a 19-0 run before the game was 7 minutes old.

Four of BC’s six turnovers during the spurt were in its backcourt, and Clemson led by as many as 24 points in the first half, scoring on a variety of picturesque dunks and driving layups in transition.

K.C. Rivers had 11 points and 10 players scored for the Tigers, who shot 48 percent in their fourth win in five games.

The rout allowed Clemson coach Oliver Purnell to rest many of his regulars in the second half, with only about 16 hours to prepare for the Blue Devils, an 82-70 winner over Georgia Tech earlier Friday.

Clemson’s previous biggest blowout in the ACC tournament was a 21-point win over North Carolina State in the 1962, the only year the Tigers reached the ACC final.