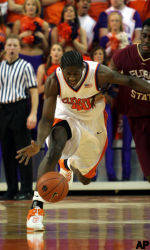 Rivers, the team’s leading scorer much of the season, had managed only 37 points combined in the Tigers past five games – four of them defeats. This time, Rivers was on target from the start as Clemson (19-5, 5-5 Atlantic Coast Conference) swept the season series from Florida State for the second time in three seasons.

But Rivers’ bucket with 11:05 left put Florida State behind 15 points and despite a late 15-5 run, the Seminoles could not rally.

Cliff Hammonds added 16 points for the Tigers, who were 15-0 after defeating Florida State on Jan. 3, but had lost five of their next eight before this one.

Al Thornton had 21 points, 13 of them after halftime. He had a layup and then a foul shot to cut Clemson’s lead to 55-50 with 4:14 left – and revive memories of the Tigers’ second-half collapse after leading by 16 in a loss to Virginia at Littlejohn Coliseum back on Jan. 28.

But Clemson, one of the ACC’s poorest foul shooting teams, made nine of its next 13 foul shots to remain in front.

No one else on the Seminoles had more than 9 points.

For Clemson, Rivers’ strong performance got it going. He hadn’t scored this much since he had 18 points in a loss to Maryland on Jan. 13.

He had two quick baskets and then hit a 3-pointer as Clemson opened a 15-7 lead. Another Rivers’ jumper increased the lead to 28-14 with 7:15 left.

Rivers’ basket with 2:52 remaining broke a more than four-minute dry spell for the Tigers from the field. He finished the half with 13 points as the Tigers took a 36-25 lead into the break.

The Seminoles had their troubles against Clemson’s defense. Their three double-figure scorers on the season, Thornton, Toney Douglas and Jason Rich were a combined 3 of 13 in the first 20 minutes.