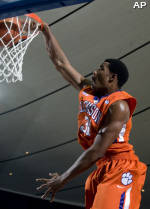 ANAHEIM, Calif. (AP) – For Demontez Stitt, sharing is the key to Clemson’s success.

Tanner Smith scored 17 points and Stitt had 16 points and five assists to lead No. 19 Clemson to an 87-79 victory over Long Beach State in the 76 Classic on Friday at the Anaheim Convention Center.

Andre Young added 13 points and Trevor Booker had 12 points and seven rebounds for the Tigers (5-1), who shot 57.6 percent and scored 20 points off turnovers.

“If we spread the floor, play as one and move the ball from side to side, teams can’t focus on one player,” said Stitt, one of six Tigers who scored in double figures.

T.J. Robinson scored a career-high 25 points and tied a career high with 15 rebounds for the 49ers (3-3), who have lost three of four.

“I really thought that Casper, T.J. and Gene were some of the best athletes on the floor,” 49ers coach Dan Monson said. “But we just didn’t have enough help for them.”

“The defense got us the lead with our pressure,” Tigers coach Oliver Purnell said. “Offensively, we got a bunch of shots going to the basket, and we took our jump shots off of that. We really attacked in the lane.”

“They came in waves,” Monson said. “We got to 61-60 and it seemed like we got fatigued. Our bench isn’t deep enough and experienced enough.”