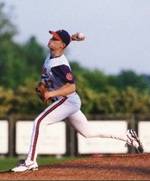 Clemson, S.C.-Fifth-ranked Clemson (35-10) will play Western Carolina (12-32) Wednesday night at Asheville, NC at 7:00 PM. The game will be part of a doubleheader as #1 South Carolina and UNC Asheville will play at McCormick Field before the Clemson and Western Carolina game.

McCormick Field, whose capacity is 4,000, was opened in 1924 and is the home of the Asheville Tourists Minor League team. To get to the stadium, take I-240 to the Charlotte Street South exit. Go south one mile on Charlotte Street and take a left on McCormick Place.

Clemson downed the Catamounts 11-7 on April 4 at Doug Kingsmore Stadium. The game will not be broadcast on radio. The Tigers will start freshman righthander Ryan Childs (3-1, 5.08 ERA) on the mound. Childs got the starting nod against the Catamounts in the first game between the two this season. He allowed four runs, two earned, along with five hits and two walks while striking out five in 4.2 innings.

Clemson’s 35-10 record is tied for fourth-best in the country on a percentage basis. Clemson is coming off a 45-hit weekend in the three-game sweep at Duke. Clemson has upped its team batting average to .295 and has an oustanding .972 fielding percentage. Clemson’s ERA stands at 3.29 as well.

Individually, Jeff Baker leads the team with a .350 batting average and 21 multi-hit games. Khalil Greene is second with a .343 batting average after a five-hit performance at Duke on Sunday. Casey Stone has also raised his batting average to .317 thanks to seven hits in three games at Duke.

Western Carolina, led by first-year Head Coach Todd Raleigh, has lost nine of its last 11 games. Jack Leggett coached Raleigh at Western Carolina in the late 80s and early 90s. The Catamounts are hitting .285 as a team with a .945 fielding percentage. They sport a 7.12 ERA as well. Western Carolina went 1-2 against Elon this past weekend. They are 1-18 in games away from Cullowhee, NC as well.

Freshman righthander Jared Burton (2-3, 8.29 ERA) will start on the mound for the Catamounts. Burton, a native of nearby Westminster, SC and West Oak High School, has made eight starts and four relief appearances. He also has 37 strikeouts and two complete games in 38.0 innings pitched.

Clemson’s 3.29 ERA is second in the ACC behind Florida State’s 3.14 team ERA. Freshman Jarrod Schmidt leads the conference with a 2.29 ERA while Wake Forest’s Scott Siemon is second at 2.41. Scott Berney is third at 2.57 and Ryan Mottl is sixth with a 2.88 ERA. The Tigers lead the ACC in triples with 21. Ryan Riley’s six triples is tied for the league lead with Adam Greenberg of North Carolina. But Riley has played 13 less games than Greenberg, therefore leads the ACC in triples per game at 0.19.

Clemson is second in the ACC in stolen bases with 77. Casey Stone is fourth with 17 and Patrick Boyd is sixth with 14 individually.

Clemson’s .972 fielding percentage is the best in the ACC. The Tigers committed just one error in the three games at Duke this past weekend.

Schmidt, Mottl, and Berney each have seven wins apiece, tying for fifth best in the league. Nick Glaser’s 11 saves is atop the ACC as well.