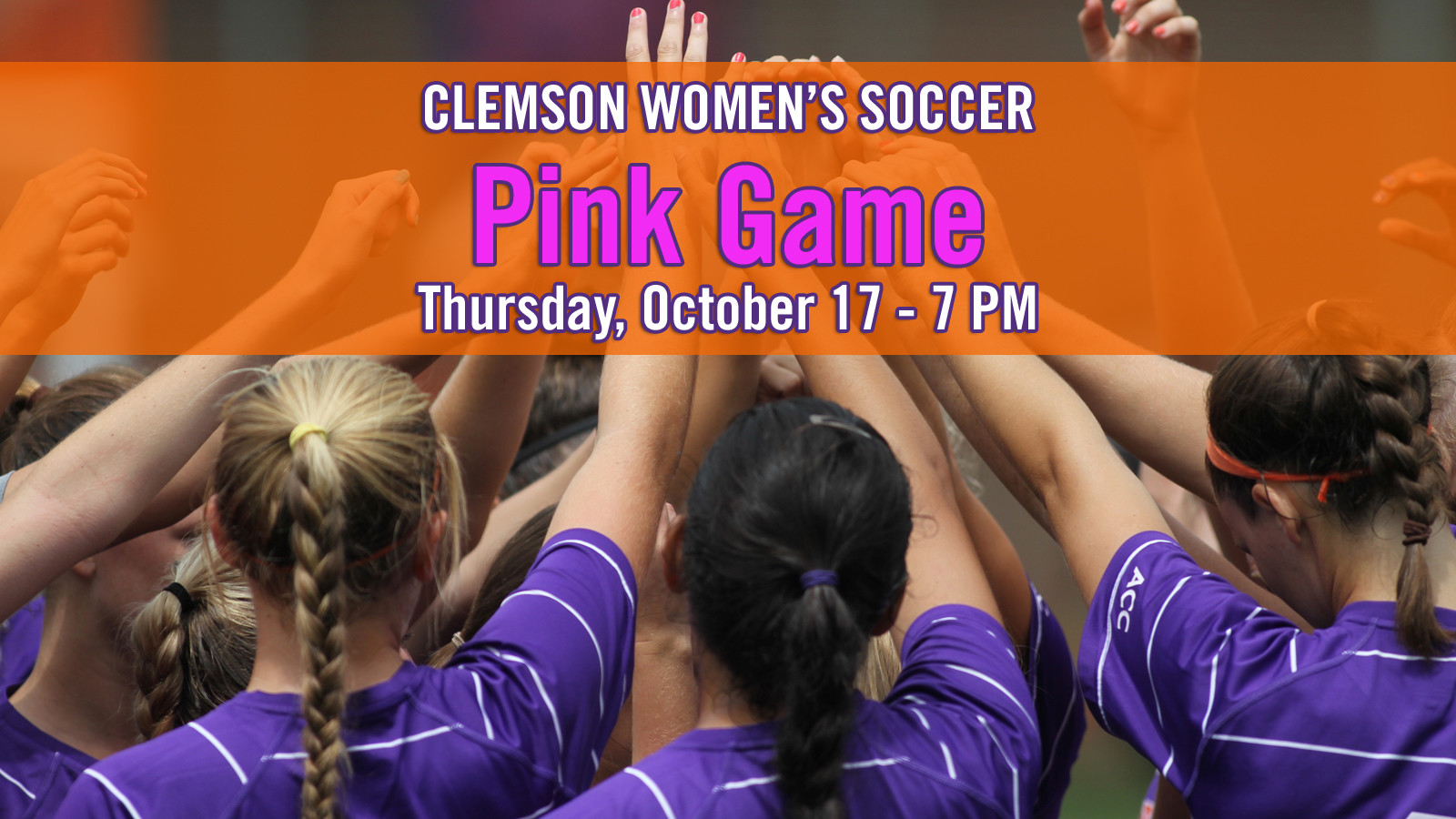 Tigers to Play Host to Duke in Pink Game Thursday

CLEMSON, SC – The Clemson women’s soccer team returns home to Historic Riggs Field after a three-game road trip to take on Duke on Thursday, October 17 at 7 PM. The match between the Tigers (7-4-3, 4-3-1 ACC) and Blue Devils (5-6-3, 2-4-2 ACC) is designated as a Pink Game in support of Clemson’s efforts to find a cure for cancer.

The Tigers are coming off a 1-0 victory over NC State in Raleigh on Sunday.  Senior Tabitha Padgett scored the lone goal of the game on a penalty kick for her second goal of the season, and is now tied for third on the team in scoring with seven points.  Senior midfielder Vanessa Laxgang (5g, 2a, 12pts) and freshman forward Catrina Atanda (4g, 8pts) rank first and second in scoring, respectively.

Freshman keeper Kailen Sheridan posted five saves in the game against the Wolfpack, including one on a penalty kick, and now has 47 saves on the season.  Sheridan also recorded her sixth solo shutout against NC State, which places her third among all ACC goalkeepers in the category.

Duke is coming off a 2-1 win against Maryland in College Park on Sunday afternoon.  The Blue Devils are led in scoring by forward Laura Weinberg who has 10 points (3g, 4a) in 14 games.  Ali Kershner has started 12 games in goal for Duke, and has tallied 47 saves and given up 18 goals in 1093 minutes played.

The overall series between Clemson and Duke is tied at 11-11, while the Tigers lead the series 6-4 in games played at Historic Riggs Field.  The last meeting between the two teams was a 3-0 victory for then-fourth-ranked Duke on September 27, 2012 in Durham, NC.  The most recent matchup played at Historic Riggs Field was a 2-0 victory for the Blue Devils (ranked #4 at the time) on September 25, 2011.

PINK GAMEThursday’s game between Clemson and Duke is designated as a “Pink Game,” and will feature several promotions and contests for Tiger fans, as well as provide an opportunity to support a great cause.

Click HERE for detailed information about the Pink Game.

Admission is free to all Clemson women’s soccer home games.  Make sure to come out to Historic Riggs Field on Thursday, October 17 at 7 PM to see an Atlantic Coast Conference soccer match between Clemson and Duke and to support a great cause!