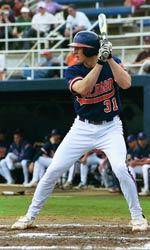 Clemson, SC – Top-ranked Clemson (27-2) will travel to Athens, GA Tuesday at 6:30 PM to take on Georgia (17-10). Georgia will make the return trip to Clemson Wednesday at 7:15 PM. Tuesday’s game will be Clemson’s first outside the state of South Carolina. Both games will be broadcast on the radio on Clemson Tiger Sports Properties. The broadcasts can be heard live via the internet at www.clemsontigers.com. Live stats will also be available on Clemson’s website.

Georgia holds a 107-88-2 advantage in the series dating back to 1900. The 197 meetings are the second most to South Carolina’s 255 meetings. Georgia and Clemson split last year’s series, as the Bulldogs won in Athens 8-4 and Clemson won at home 9-3. Head Coach Jack Leggett is 11-5 against Georgia as the Tiger skipper, including 4-5 in Athens.

The Bulldogs are coming off a three-game series at Mississippi State, where Georgia avoided the sweep with a 9-2 win on Sunday. First-year Head Coach David Perno is 10-5 at home. His team is hitting .325 with 38 homers and 61 steals in 74 attempts, led by Chaz Lytle’s 20 steals in 24 attempts. Lytle is also hitting .403 in 124 at-bats. Eight different Bulldogs have hit at least three homers as well.

Georgia, whose team ERA is 5.24, will send out freshman lefty Jason Fellows (1-0, 4.37 ERA) to the mound Tuesday. The Lilburn, GA native has only allowed two extra-base hits in 22.2 innings pitched this year. Clemson will counter with sophomore righty Steven Jackson (3-1, 4.30 ERA). The Summerville, SC native has struck out 37 and walked 16 in 37.2 innings pitched in 2002. He also sports a .253 opponents’ batting average.

The Tigers are coming off a win Sunday against N.C. State after two, 13-game winning streaks to start the season. Tuesday’s contest will be Clemson’s first on the road since the South Carolina game on March 2. Clemson went 22-2 on its 24-game homestand from March 3 to April 7.

Senior shortstop Khalil Greene continues to pace the Tiger-hitting attack with a .479 batting average. He has shown why he is a leading candidate for All-America honors, as he continues to make the spectacular plays. His .962 fielding percentage is an outstanding mark for shortstops. Clemson is hitting .345 as a team while holding its opponents to a staggering .227 average. Clemson’s team ERA is at 3.26 as well.

Second-baseman David Slevin, who has missed the last five games with a sprained wrist, is expected to be ready for action Tuesday.