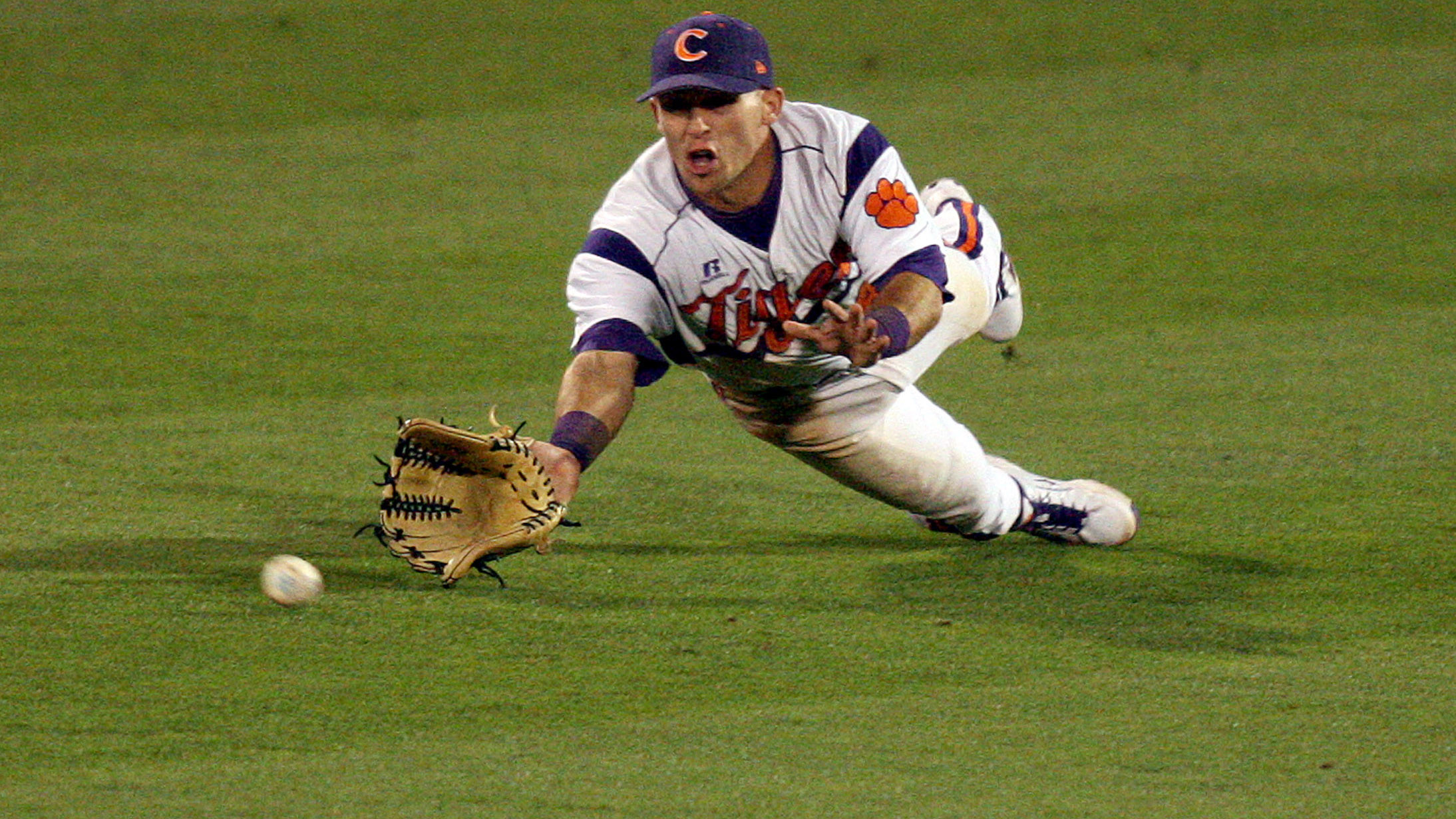 The first game of the tourney will pit Clemson against Liberty on Friday at 1:00 PM.  The Tigers will be the designated home team against the Flames.  South Carolina will then face Saint Louis on Friday at 7:00 PM.

The winner of the Columbia Regional will play the winner of the Chapel Hill (NC) Regional from June 7-10.  The four teams in that regional are North Carolina, Florida Atlantic, Towson, and Canisius.Tigers Earn 38th NCAA Tournament BidClemson will play in its 38th all-time NCAA Regional when it plays in the Columbia (SC) Regional from May 31 to June 3 at Carolina Stadium.  The 38 appearances are fifth-most in NCAA history, trailing only Texas (55), Florida State (51), Miami (FL) (42), and Oklahoma State (39).Clemson’s NCAA Tournament HistoryThe 2013 season marks Clemson’s 38th trip to the NCAA Tournament dating back to the 1947 season.  That year, Clemson actually advanced to the Final Eight of the NCAA Tournament, but it is not considered a College World Series season because only two teams went to the CWS in those days.

Clemson won the 1947 District III Tournament in Charlotte by coming through the losers’ bracket.  The Tigers, coached by Randy Hinson, lost in the first round to Alabama 8-2, then came back with a win over Auburn and two wins over Alabama to advance.  Clemson’s season ended when Yale, led by future President George H.W. Bush, defeated the Tigers in New Haven, CT by a score of 7-3.  Bush was 1-for-3 as the starting first-baseman.

Clemson made its first trip to Omaha and the College World Series in 1958 when the Tigers again came through the losers’ bracket.  After losing to Florida in the first round, Clemson came back to defeat George Washington, Florida State, and Florida twice to advance under first year Head Coach Bill Wilhelm.  Clemson defeated Florida 15-14 and 3-1 on June 9 to advance.  Harold Stowe struck out 17 in that second game on June 9, and that is still a Clemson record for strikeouts in an NCAA Tournament game.

The Tigers advanced to Omaha in 1959, this time with three wins (one over Georgia Tech and two over Florida State).  One of the wins over the Seminoles was a 24-2 victory at Gastonia, NC.  That tally is still tied for the most runs scored by Clemson in an NCAA Tourney game.

The Tigers did not advance to Omaha again until 1976.  In fact, Clemson made just one NCAA Tournament appearance between 1960 and 1974.  That was in 1967 when Clemson reached the Regional Championship but lost to Auburn 6-5.

Clemson made it to Omaha three out of five years between 1976-80.  Clemson won a regional in Columbia, SC in 1976 with three straight wins, then came through the losers’ bracket in Miami (FL) in 1977 to advance to Omaha.  The 1980 season was the first year Clemson played host to a regional, as Clemson swept three games by scoring 45 runs, including 17 in a 17-12 win over South Carolina.

Overall, Clemson has been to a regional in 38 seasons (including 2013), fifth-most all-time.  Clemson’s all-time record in NCAA Tournament play is 112-81, a 58.0 winning percentage.

Clemson is 67-41 (.620) under Head Coach Jack Leggett in NCAA Tournament play, including a 40-9 record (.816) in home NCAA Tourney games.  Leggett has taken Clemson to a regional 19 times in the 20 years he has been Clemson’s head coach, and the Tigers have advanced to the College World Series six times.  Leggett has also taken Clemson to a super regional nine of the 14 years that format has been in existence.Scouting #1-Seeded South CarolinaFirst-seeded and #13-ranked South Carolina (39-18) enters the Columbia Regional after losing both its games in the SEC Tournament at Hoover, AL.  The Gamecocks, who are 28-6 at home, had a 17-12 conference record during the regular season, as it finished second in the SEC Eastern Division standings.  The 2013 season marks the 29th time in school history that South Carolina has played in an NCAA Tournament.

South Carolina is led by first-year Head Coach Chad Holbrook.  The Gamecocks are 8-8 in one-run games and 8-3 in two-run games.  They also have a 28-5 record when outhitting their opponents and are 34-0 when leading entering the ninth inning.

Clemson and South Carolina have met 303 times, with the Tigers holding a 170-131-2 lead in the series that dates to 1899.  In their three-game series at three different sites earlier in the 2013 season from March 1-3, the Gamecocks defeated the Tigers 6-0 at Doug Kingsmore Stadium.  The next day at Fluor Field in Greenville, SC, Clemson downed South Carolina 6-3.  In the series-finale, South Carolina responded with an 8-0 win at Carolina Stadium.

The Gamecocks lead 80-66-2 over the Tigers in games played in Columbia, including a 6-2 advantage and five straight wins at Carolina Stadium.  Jack Leggett has a 35-40 record against South Carolina as Clemson’s head coach, including a 16-19 record in Columbia.  He was also 3-8 against the Gamecocks as head coach at Western Carolina, meaning he is 38-48 all-time against South Carolina.

The Tigers, who are 12-8 on opponents’ home fields and 1-3 in neutral-site contests, are led by 20th-year Head Coach Jack Leggett.  His 886 wins are tied for sixth-most in college baseball during his tenure.  The Tigers are also 8-12 against top-25 ranked teams in 2013.

Freshman lefthander Matthew Crownover has a 7-2 record and a 2.05 ERA in 66.0 innings pitched over 14 appearances (13 starts).  Sophomore righty Daniel Gossett is 9-4 with a 2.53 ERA, .212 opponents’ batting average, and a team-high 89 strikeouts in 92.1 innings pitched over 15 starts.  Junior righthander Matt Campbell has a team-high seven saves, while senior righty Scott Firth has added four saves.  Clemson is fielding at a .971 clip as well.Scouting #3-Seeded LibertyThird-seeded Liberty (34-27) enters the Columbia Regional after winning the Big South Conference Tournament title in Lynchburg, VA.  The Flames, who have yet to play a neutral-site game in 2013, had a 13-11 conference record during the regular season, as they finished fourth in the Big South Conference North Division standings.  The 2013 season marks the fourth time in school history that Liberty has played in an NCAA Tournament.

Liberty is led by sixth-year Head Coach Jim Toman, who is a former assistant coach at South Carolina.  The Flames are 10-5 in one-run games.

Clemson and Liberty have met five times, with the Flames holding a 3-2 lead in the series that dates to 1988.  In their last meeting at Liberty in 2000, the Flames downed the Tigers 6-4.  Liberty defeated Clemson twice in a three-game series at Doug Kingsmore Stadium in 1999, while Clemson topped the Flames 7-5 in their first meeting in 1988.

The two teams have never met on a neutral field or in the NCAA Tournament.  Jack Leggett has a 1-3 record against Liberty as Clemson’s head coach.  He was also 3-0 against the Flames as head coach at Western Carolina, meaning he is 4-3 all-time against Liberty.Scouting #4-Seeded Saint LouisFourth-seeded Saint Louis (41-19) enters the Columbia Regional after winning the Atlantic 10 Conference Tournament title in Charlotte, NC.  The Billikens won five games in three days, including four wins in the final two days, after losing their tournament-opener to capture the championship.

The Billikens, who are 9-5 in neutral-site games, had a 17-7 conference record during the regular season, as it tied for first in the Atlantic 10 Conference standings.  The 2013 season marks the seventh time in school history that Saint Louis has played in an NCAA Tournament.  Saint Louis led by sixth-year Head Coach Darin Hendrickson.  The Billikens are 8-7 in one-run games.

Clemson and Saint Louis have never met on the diamond.PollsThe Tigers remained in the top 25 of all three polls after going 0-3 in the ACC Tournament last week.  Clemson fell three spots to #17 in the Collegiate Baseball poll and fell four spots to #22 in the Baseball America rankings.  The Tigers also dropped six spots to #24 in the USA Today coaches poll.

The top-25 rankings means that Clemson has had at least least one weekly top-25 ranking during all 20 of Jack Leggett‘s 20 seasons as head coach at Clemson.

Clemson has had at least one final top-25 ranking in 15 of Leggett’s first 19 seasons in Tigertown.  The Tigers have also been ranked #1 for 20 weeks by at least one of the three major polls under Leggett.  Their last #1 ranking came on February 12, 2007 by both Baseball America and Collegiate Baseball.27That’s how many of Clemson’s 59 games have been against teams that will play in the 2013 NCAA Tournament, which equates to 46 percent.  Clemson has an 11-16 record against the teams in the field.  The Tigers have played eight different teams that are in the NCAA Tournament.

Clemson has played three of the eight national seeds in North Carolina, Virginia, and Florida State for a total of 10 games.  The Tigers are 3-7 in those 10 contests.  The Tigers are 6-11 against #1 seeds, 3-4 against #2 seeds, and 2-1 against #3 seeds.Tiger Freshmen Have 16 WinsOne of the keys to Clemson’s 39-win season has been the performance of the freshman pitchers.  As a group, the five freshman hurlers are a combined 16-8 for the season with a 3.49 ERA over 216.2 innings pitched.

The 16 victories are fourth-most in Clemson history.  The record is held by the 1997 freshmen that had a combined record of 27-13.  Leading the way was Ryan Mottl, who had a 10-3 record, still the most wins by a Tiger freshman in one season.

This year’s freshman group is fourth-best thanks to Matthew Crownover‘s 7-2 mark and Zack Erwin‘s 5-1 record.  Crownover’s seven wins are tied for fourth-most in Clemson history by a freshman.  A win in the NCAA Tournament can tie him for third with Scott Parrish, who had eight wins as a freshman in 1981.