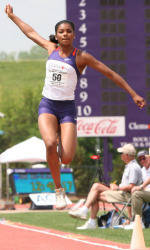 Tigers to Open Competition at the NCAA East Region Preliminary Round Thursday in Greensboro, NC

30 Competitors Qualify for East Prelims The NCAA Outdoor Championships adopted an entirely different format in 2010. The four regional site format, which was used from 2003-09, no longer exists. The NCAA split the field into two regions – East and West – and determined that the first and second rounds of the NCAA Championships would be held May 27-29 at two specified locations.

The East Preliminary Round will be held at Irwin Belk Track on the North Carolina A&T campus in Greensboro, NC. It is the same site that served as last year’s NCAA East Regional host.

The top 48 individuals and top 24 relays in each event – based off the East Region descending order list – qualify for the NCAA East Preliminary Round. The meet this weekend will feature two rounds for each track event other than the steeplechase, 5K, 10K, and relays. Only the quarterfinals will be held for the relays, with the final two rounds coming at the NCAA Championships in Eugene, OR in two weeks.

The three-day meet gets underway on Thursday, May 27 with the qualifying round for the women’s javelin throw at 10:00 AM.

It was Clemson’s first ACC outdoor title in women’s track & field since the 1999 season. The Tigers won by a wide margin, posting 177 points to Florida State’s 124.

Clemson won three individual championships – April Sinkler in the high jump and long jump, and Liane Weber in the heptathlon. The Tigers also won their first conference crown in the 4x100m relay since 2001 when the group of Michaylin Golladay, Stormy Kendrick, Kristine Scott and Jasmine Edgerson ran a time of 44.36 in the finals.

In addition to the conference champions, Clemson displayed its depth with 12 All-ACC performances. Among the most notable, Kendrick was runner-up in both short sprints (100m, 200m) and Patricia Mamona was All-ACC in the triple jump and heptathlon. Kim Ruck earned all-conference nods in the 5K and 10K.

Clemson’s NCAA Outdoor History Both the men and women have strong history as it pertains to the NCAA Outdoor Championships. The men’s program has finished in the top 25 at the national outdoor meet in 17 seasons, most recently 2008 under the late Bob Pollock.

The men’s team has had at least one national scorer at the NCAA Outdoor Championships every year since 1980. Clemson’s best outdoor finishwas in 2002, when Pollock’s squad tied for fourth behind event runner-up finishes in the 100m, 200m, 110m hurdles and 4x100m relay.

The women will be seeking their first top-25 finish in eight years. Clemson has six top-25 finishes in its women’s track & field history, with a program-best seventh-place showing in 2001.

The Clemson track & field program has five NCAA outdoor national championships to its name, in terms of individual events or relays. The men have claimed three – Michael Green (100m, 1993), Duane Ross (110mHH, 1995) and Shawn Crawford (200m, 2000). The women’s 4x400m relay won the top prize in 2001, and then Jamine Moton won the hammer throw the following season.

Clemson Women in National Rankings The Clemson women’s team has been ranked among the nation’s top 20 since the third week of the outdoor season, which includes six straight weeks heading into the NCAA East Preliminary Round.

The Tigers began the year unranked in the preseason list released by the coaches association Mar. 31 and have climbed to as high as No. 6, the week after winning the ACC Championship. Currently, the Tigers are again No. 6 according to the USTFCCCA.