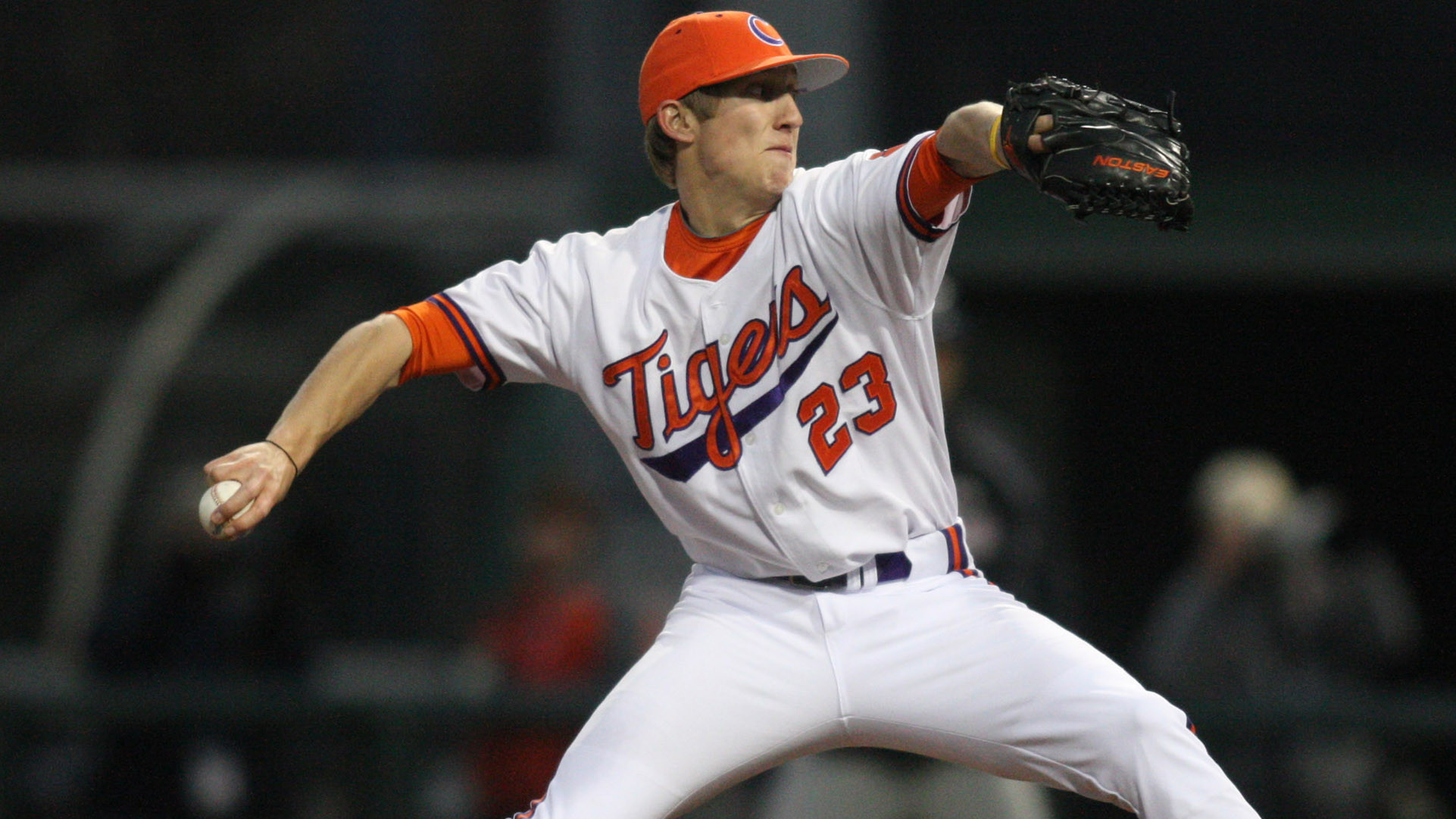 Tigers to Open ACC Play on the Road Friday-Sunday

In game-two, the Wolfpack will start senior righty Ethan Ogburn (1-0, 1.00 ERA) on the mound. The High Point, NC native has made one start and one relief appearance for a total of 9.0 innings pitched. He has given up three hits (.103 opponents’ batting average) and five walks with eight strikeouts.

Clemson will counter with freshman righthander Clate Schmidt (2-0, 1.32 ERA) on Saturday. The Acworth, GA native has made two starts and one relief appearance for a total of 13.2 innings pitched. He has given up 13 hits (.245 opponents’ batting average) and four walks with 10 strikeouts.

In game-three, N.C. State will start freshman lefthander Brad Stone (1-0, 6.75 ERA) on the mound. The Charlotte, NC native has made two starts and one relief appearance for a total of 9.1 innings pitched. He has yielded eight hits (.222 opponents’ batting average) and four walks with 12 strikeouts.

The Tigers will counter with senior righty Scott Firth (2-1, 0.86 ERA) on Sunday. The Buffalo Grove, IL native has made three starts for a total of 21.0 innings pitched. He has allowed 15 hits (.208 opponents’ batting average) and four walks with 12 strikeouts.

The SeriesClemson and N.C. State have met 184 times on the diamond, with the Tigers holding a 110-73-1 lead in the series dating to the 1921 season. The two teams have faced each other at least one time every season since 1953.

Last season at Doug Kingsmore Stadium, the Wolfpack won the last two games of the series after the Tigers won game-one 7-6 in 12 innings. In 2011 at Doak Field, the Wolfpack won two of the three games, then Clemson defeated N.C. State 6-3 in the ACC Tourney at Durham, NC.

The WolfpackN.C. State, led by 17th-year Head Coach Elliott Avent and ranked as high as #8 in the nation, enters the series against Clemson with an 11-2 overall record after splitting a pair of midweek games. Elon defeated the Wolfpack 24-12 on Tuesday before N.C. State topped Campbell 5-2 on Wednesday. N.C. State has an 8-1 record at home in 2013.

The pitching staff has a 2.97 ERA and .180 opponents’ batting average along with 116 strikeouts against 53 walks in 118.0 innings pitched. Senior righty Ryan Wilkins has a 2-0 record, one save, and has allowed just two hits, no runs, and two walks with seven strikeouts in 10.2 innings pitched over five relief appearances. N.C. State, who has allowed 17 steals in 19 attempts, is fielding at a .956 clip as well.

The TigersClemson enters the series at #8 N.C. State with a 7-4 overall record after defeating Wofford 9-2 at home on Wednesday. The Tigers, who are 0-1 on opponents’ home fields, also won one of three games against #7 South Carolina over the weekend.

The Tigers are averaging 4.6 runs per game and hitting .253 with a .331 slugging percentage and .321 on-base percentage thanks to 32 walks and five hit-by-pitches against 71 strikeouts. Clemson has also totaled 20 doubles, one triple, two homers, and 15 stolen bases in 20 attempts.

Steve Wilkerson leads the team with a .366 batting average along with three doubles, one homer, eight RBIs, and a team-high five steals. Garrett Boulware is hitting .321, while freshman Steven Duggar is batting .316. Shane Kennedy has a team-high 12 RBIs as well.

The pitching staff has a 2.16 ERA and .228 opponents’ batting average in 100.0 innings pitched. The staff has allowed 35 walks against 77 strikeouts, good for a 2.20 strikeout-to-walk ratio. Junior righty Matt Campbell has all three of the team’s saves. The Tigers are fielding at a .975 clip as well.

Wilkerson No Stranger to StreaksJunior second-baseman Steve Wilkerson (Roswell, GA) has been one of Clemson’s best hitters in 2012 and 2013. The switch-hitter is batting a team-high .366 with three doubles, one homer, eight RBIs, nine runs, and a team-high five stolen bases.