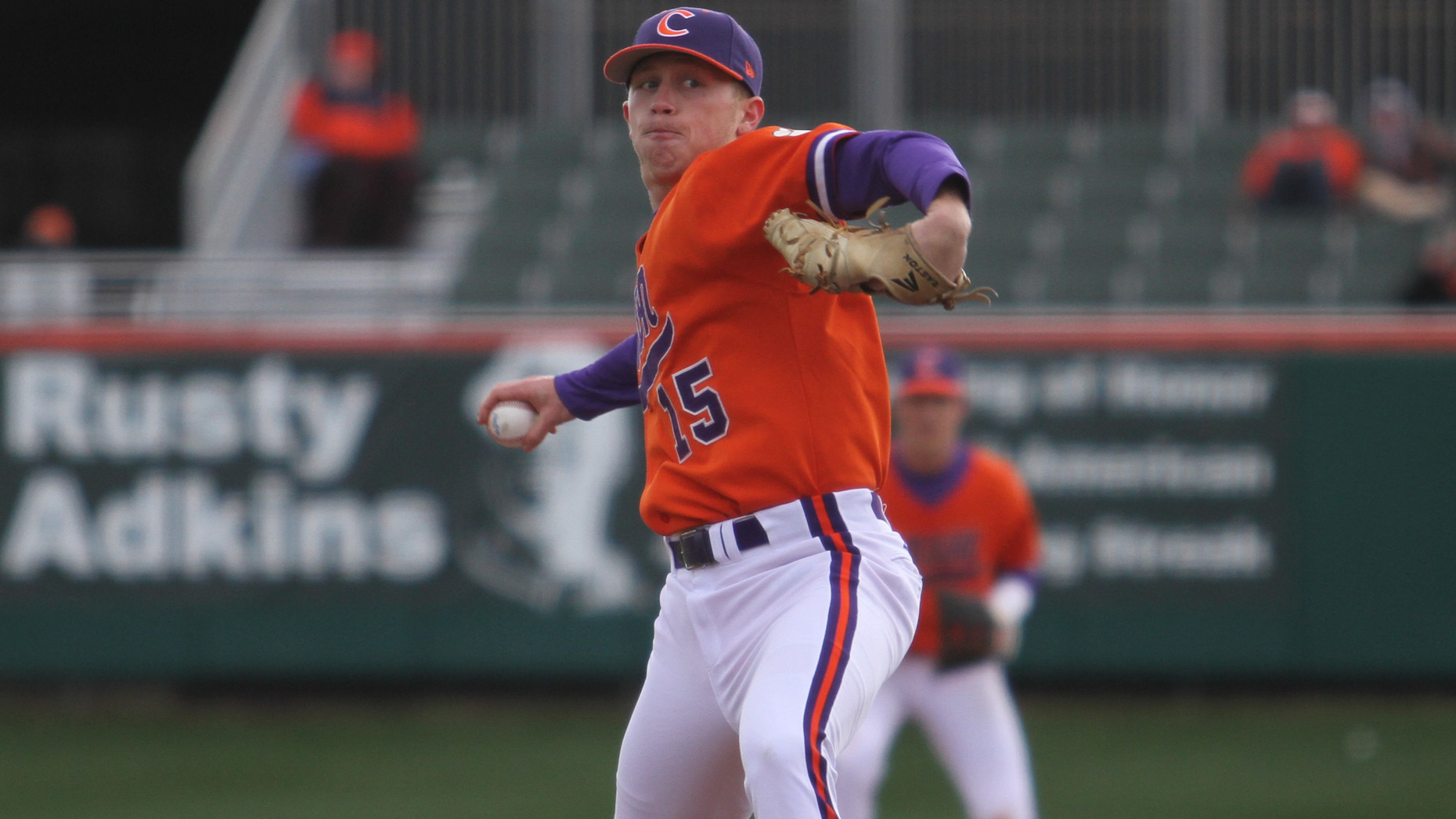 Clemson vs. Western Carolina & Presbyterian CollegeClemson (21-11), ranked as high as #17 in the nation, will travel to Cullowhee, NC to face Western Carolina (19-15) on Tuesday, then the Tigers will host Presbyterian College (18-15) on Wednesday at Doug Kingsmore Stadium. First pitch for Tuesday’s game is scheduled for 6:00 PM, while Wednesday’s contest is slated to start at 6:30 PM.

The Series (Western Carolina)Clemson and Western Carolina have met 69 times, with the Tigers leading 54-15 in the series dating back to the 1974 season. The two have played at least one game every year since 1978.

Western Carolina defeated Clemson twice in one year for the first time ever in 2012 when the Catamounts won both games of the home-and-home series. Western Carolina won 8-4 in Cullowhee on March 14, then totaled 22 hits in its 13-8 win at Doug Kingsmore Stadium on April 4.

The Starting Pitchers (Western Carolina)Western Carolina will start senior lefthander Adam Curtis (1-1, 3.05 ERA) on the mound. The Arden, NC native has made four starts for a total of 20.2 innings pitched. He has allowed 24 hits (.282 opponents’ batting average) and five walks with 17 strikeouts.

The Tigers will counter with senior righthander Jonathan Meyer (2-0, 3.68 ERA) on Tuesday. The San Diego, CA native has made eight relief appearances and one start for a total of 22.0 innings pitched. He has surrendered 27 hits (.307 opponents’ batting average) and two walks with 20 strikeouts.

The Starting Pitchers (Presbyterian College)Both teams’ starting pitchers for Wednesday’s game have yet to be determined.

The CatamountsWestern Carolina, led by sixth-year Head Coach Bobby Moranda, enters Tuesday’s game against #17 Clemson with a 19-15 overall record and 9-6 Southern Conference mark after winning two of three games at Furman over the weekend. The Catamounts are 11-6 at home in 2013.

The pitching staff has a 4.33 ERA and .271 opponents’ batting average along with 280 strikeouts against 146 walks in 307.2 innings pitched. Senior righthander Preston Hatcher has seven of the team’s nine saves along with a 4-2 record and 2.84 ERA in 25.1 innings pitched over 18 relief appearances. Western Carolina, who has allowed 38 steals in 56 attempts, is fielding at a .963 clip as well.

The Blue HosePresbyterian College, led by ninth-year Head Coach Elton Pollock, enters Wednesday’s game at #17 Clemson with an 18-15 overall record and a 5-4 Big South Conference mark after being swept at home by Campbell. Presbyterian College is 9-7 on opponents’ home fields in 2013.

Presbyterian College is averaging 4.3 runs per game and hitting .256 with a .338 slugging percentage and .329 on-base percentage thanks to 96 walks and 31 hit-by-pitches against 176 strikeouts. The team has also totaled 50 doubles, four triples, 11 home runs, and 39 stolen bases in 52 attempts.

The pitching staff has a 4.00 ERA and .257 opponents’ batting average along with 193 strikeouts against 101 walks in 294.2 innings pitched. Sophomore lefthander Michael Ricchi and freshman righty Michael Trebendis have three saves apiece. Presbyterian College, who has allowed 50 steals in 60 attempts, is fielding at a .972 clip as well.

The TigersClemson, ranked as high as #17 in the nation, enters Tuesday’s game at Western Carolina with a 21-11 overall record and 9-6 ACC mark after sweeping Boston College on the road over the weekend. The Tigers, who have won five games in a row, are 7-4 on opponents’ home fields and 13-7 at home in 2013.

The Tigers are averaging 5.1 runs per game and hitting .272 with a .357 slugging percentage and .336 on-base percentage thanks to 98 walks and 14 hit-by-pitches against 213 strikeouts. Clemson has also totaled 55 doubles, four triples, 10 homers, and 44 stolen bases in 67 attempts.

Tyler Slaton leads the team with a .351 batting average, while Garrett Boulware is hitting .327 with five homers and 29 RBIs. Shane Kennedy is batting .318 with two homers, 19 RBIs, and a team-high .403 on-base percentage. Thomas Brittle has a team-high 13 steals as well.

The pitching staff has a 3.32 ERA and .256 opponents’ batting average in 290.0 innings pitched. The staff has allowed 100 walks against 201 strikeouts, good for a 2.01 strikeout-to-walk ratio. Junior righthander Matt Campbell has six of the team’s nine saves. The Tigers are fielding at a .973 clip as well.

PollsFor the first time in 2013, the Tigers entered the top 25 of two polls after going 5-1 in six games last week. Clemson is ranked #17 by Collegiate Baseball and #22 by Baseball America. The Tigers are outside the top 25 in the Sports Weekly coaches poll. The top-25 ranking means that Clemson has had at least least one top-25 ranking during all 20 of Jack Leggett‘s 20 seasons as head coach at Clemson.

Clemson has had at least one final top-25 ranking in 15 of Leggett’s first 19 seasons. The Tigers have also been ranked #1 for 20 weeks by at least one of the three major polls under Leggett. Their last #1 ranking came on February 12, 2007 by both Baseball America and Collegiate Baseball.

Kent ControlJunior righthander Mike Kent (Springfield, VA) has been one of the team’s top long relievers in 2013. That is thanks in large part to his excellent control. In 12.0 innings pitched over seven relief appearances, he is 1-1 with a 3.75 ERA and has allowed just two walks against nine strikeouts. In the last two seasons, Kent has issued only 12 walks in 50.1 innings pitched, good for a 2.15 walks-per-nine-innings-pitched mark.