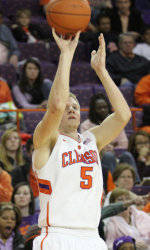 QUICK FACTS  Clemson and UTEP face off for the fifth time on Thursday, but the first time since the 1982-83 season. UTEP holds a 3-1 advantage over Clemson, with all four games occurring between 1963-83 in El Paso.  Clemson is making its sixth appearance in a regular season tournament in Honolulu. The Tigers were 8-4 in four appearances in the former Rainbow Classic and 2-0 in the 1986-87 Hawaii Pacific Tournament. This is Clemson’s first appearance in the Diamond Head Classic.  The Tigers also played in the Maui Invitational in 1998. Clemson went 2-1 in that event under then coach Larry Shyatt, including a 79-45 victory over Kansas State, also a participant in this year’s Diamond Head Classic.  The Tigers have won 25 regular season tournaments over the years, including as recently as 2008 when Clemson won the inaugural Charleston Classic.  Clemson has a 16-15 record against the other six schools in the event and has played every team except Southern Illinois. The Tigers are 11-14 vs. Auburn, 2-0 vs. Long Beach State, 1-0 vs. Hawaii, 1-0 vs. Xavier, and 1-1 vs. Kansas State.  In November, it was announced that Clemson would be part of another ESPN-sponsored tournament in 2012 – the Old Spice Classic in Orlando, FL.  Thursday’s 9:30 AM local start for the Clemson vs. UTEP game will be the second earliest tipoff in Clemson basketball history. Clemson had a 9:00 AM local start to its game with Chaminade in Maui on Nov. 24, 1998. Clemson won that game 72-60.  Bryan Narcisse and Tanner Smith both earned their undergraduate degrees this semester. Narcisse earned his degree in communication studies, Smith in marketing. Both will miss Thursday’s ceremony due to the Hawaii trip.  Prior to Narcisse and Smith, the most recent Clemson basketball player to compete with his degree in hand was Bruce Martin in 1994-95.  Smith has scored a career-high 17 points in regular season tournament play each of the last two years. He did it versus the same team, posting the figure against Long Beach State at the 76 Classic in 2009, and then last November in the Virgin Islands Paradise Jam.