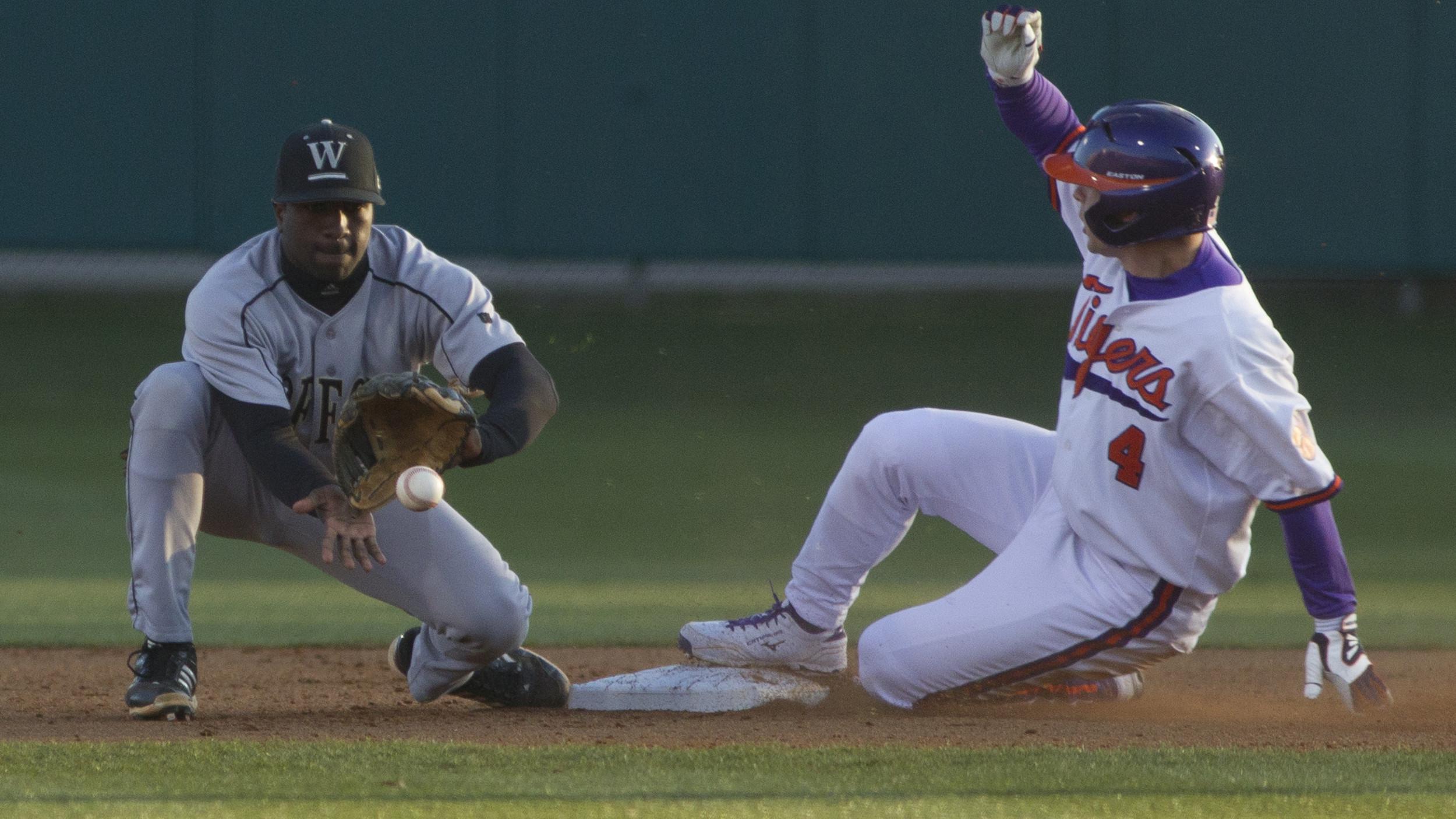 Clemson to Play in 40th ACC TournamentClemson (39-17), the #5 seed, will open its ACC Tournament slate by playing #4-seeded N.C. State (42-13) on Wednesday at 7:00 PM on the first day of the ACC Tournament. The Tigers will be the designated visiting team and occupy the first-base dugout.

The Tigers will then play #1-seeded North Carolina (47-8 entering Monday’s game against Florida State) on Friday at 7:00 PM. Clemson will be the designated home team and occupy the third-base dugout in that game.

On Saturday, Clemson’s third game will be against #8-seeded Miami (FL) (35-21) at 3:00 PM. A coin flip will determine the designated home for the game against the Hurricanes.

The games will be played at Durham (NC) Bulls Athletic Park. It will be the eighth time the ACC Baseball Tournament is held in Durham and the first time since 2011. The round-robin format, in its seventh year, features two separate four-team brackets that guarantees all eight teams will play a minimum of three games and maximum of four games during the ACC Tournament.

The other bracket is comprised of #2-seeded Florida State, #3-seeded Virginia, #6-seeded Virginia Tech, and #7-seeded Georgia Tech. The winner of each bracket will meet in the ACC Championship Game on Sunday at 1:00 PM. That contest will be televised by ESPN2 and the winner of the game will receive an automatic bid into the 2013 NCAA Tournament.

Clemson’s first three games in the ACC Tournament will be televised live by Regional Sports Network. The three games will also be available via webcast at ESPN3.

All of Clemson’s ACC Tournament games will be broadcast live on the radio by Clemson Tiger Sports Network. Live stats will also be available at ClemsonTigers.com for all Tiger games.

Earlier this season at Doak Field in Raleigh, the Tigers won the first two games by scores of 10-5 and 7-4 before N.C. State won the series-finale 4-1. Last season at Doug Kingsmore Stadium, the Wolfpack won two of three games.

The Tigers hold an 18-11 lead in ACC Tournament games. The last time the two teams met in the ACC Tourney was on May 28, 2011, as Clemson defeated the Wolfpack 6-3 at Durham (NC) Bulls Athletic Park. N.C. State’s last victory over the Tigers in the ACC Tourney came in 2010 by a score of 13-8 at Greensboro, NC. Clemson leads the all-time series 14-12 in neutral-site contests as well.

The Series (North Carolina)Clemson and North Carolina have met 184 times, with the Tigers holding a 97-86-1 lead in the series dating to the 1901 season.

Earlier this season at Boshamer Stadium in Chapel Hill, the Tar Heels won the first two games by scores of 10-3 and 6-2 before Clemson won the series-finale 5-4 in 11 innings. Last season at Doug Kingsmore Stadium, the Tar Heels swept the three-game series.

The Tigers hold a 16-11 lead in ACC Tournament games. The last time the two teams met in the ACC Tourney was on May 23, 2009, as Clemson defeated the Tar Heels 4-3 in 11 innings at Durham (NC) Bulls Athletic Park. North Carolina’s last victory over the Tigers in the ACC Tourney came in 2004 by a score of 16-5 at Salem, VA. Clemson leads the all-time series 15-12 in neutral-site contests as well.

The Series (Miami (FL))Clemson and Miami (FL) have met 59 times, with the Hurricanes holding a 31-27-1 lead in the series dating to the 1977 season. Earlier this season at Alex Rodriguez Park in Coral Gables, the Tigers won the first game by a score of 1-0 before Miami won the final two games by scores of 2-1 and 7-0. Last season at Doug Kingsmore Stadium, the Tigers won two of three games.

The Tigers hold a 2-1 lead in ACC Tournament games. The last time the two teams met in the ACC Tourney was on May 21, 2008, as Miami defeated the Tigers 7-1 at Jacksonville, FL.

Clemson’s last victory over the Hurricanes in the ACC Tourney came in 2007 by a score of 5-4 in 13 innings at Jacksonville, FL. Miami leads the all-time series 8-6 in neutral-site contests as well.

Jack Leggett has a 19-19 record against Miami as Clemson’s head coach, including a 2-1 mark in ACC Tournament games. Leggett was 0-1 against the Hurricanes as Western Carolina’s head coach, meaning he is 19-20 all-time against Miami.

The Starting Pitchers (N.C. State)N.C. State will start freshman lefthander Brad Stone (2-2, 6.23 ERA) on the mound. The Charlotte, NC native has made 11 starts and three relief appearances for a total of 47.2 innings pitched. He has allowed 44 hits (.240 opponents’ batting average) and 21 walks with 53 strikeouts.

The Tigers will counter with sophomore righthander Daniel Gossett (9-3, 2.20 ERA) on Wednesday. The Lyman, SC native has made 14 starts for a total of 86.0 innings pitched. He has given up 67 hits (.209 opponents’ batting average) and 31 walks with 83 strikeouts.

The Starting Pitchers (North Carolina)The starting pitchers for Friday’s game have yet to be determined.

The Starting Pitchers (Miami (FL))The starting pitchers for Saturday’s game have yet to be determined.

The WolfpackN.C. State, led by 17th-year Head Coach Elliott Avent and ranked as high as #9 in the nation, enters the ACC Tournament with a 42-13 overall record and 19-10 ACC mark after sweeping Duke at Durham Bulls Athletic Park last weekend. N.C. State, who has won 24 of its last 27 games, is 2-0 in neutral-site contests in 2013.

The pitching staff has a 3.40 ERA and .222 opponents’ batting average along with 493 strikeouts against 208 walks in 500.0 innings pitched. Senior lefthander Grant Sasser has a team-high seven saves, while senior righty Chris Overman has six saves and has not allowed an earned run in 21.2 innings pitched over 17 relief appearances. N.C. State, who has allowed 68 steals in 90 attempts, is fielding at a .968 clip as well.

The Tar HeelsNorth Carolina, led by 15th-year Head Coach Mike Fox and ranked as high as #3 in the nation, enters Monday night’s game against #7 Florida State with a 47-8 overall record and 21-7 ACC mark after losing two of three games against Virginia over the weekend. North Carolina, who has not lost back-to-back games all season, is 3-0 in neutral-site contests in 2013.

The pitching staff has a 2.62 ERA and .210 opponents’ batting average along with 444 strikeouts against 195 walks in 495.1 innings pitched. Freshman righthander Trent Thornton has an 8-1 record, a team-high six saves, a 1.48 ERA, and 50 strikeouts against nine walks in 60.2 innings pitched over 21 appearances (five starts). North Carolina, who has allowed 41 steals in 48 attempts, is fielding at a .975 clip as well.

The HurricanesMiami, led by 20th-year Head Coach Jim Morris, enters the ACC Tournament with a 35-21 overall record and 14-16 ACC mark after defeating Georgia Tech twice in three games last weekend. Miami has yet to play a neutral-site contest in 2013.

The TigersClemson, ranked as high as #14 in the nation, enters the ACC Tournament with a 39-17 overall record and an 18-12 ACC mark after losing two of three games at #8 Florida State last weekend. The Tigers, who have won 23 of their last 29 games, are 1-0 in neutral-site contests in 2013.

Shane Kennedy leads the team in batting average (.321) and on-base percentage (.419) along with totaling four homers, four triples, five doubles, 33 RBIs, and 18 steals. Garrett Boulware is batting .310 with seven homers and 43 RBIs, while Steve Wilkerson is hitting .313 with a team-high 16 doubles. Thomas Brittle has added a team-high 19 stolen bases as well.

The pitching staff has a 2.97 ERA and .258 opponents’ batting average in 506.0 innings pitched. The staff has allowed 177 walks against 363 strikeouts, good for a 2.05 strikeout-to-walk ratio. Junior righthander Matt Campbell has seven of the team’s 14 saves, while senior righty Scott Firth has four saves. The Tigers are fielding at a .972 clip as well.

Prior to capturing the 2006 title, the Tigers had not won it all since 1994. That was Jack Leggett‘s first year as Clemson’s head coach. Clemson defeated Florida State 4-1 in the championship game held in Greenville (SC) Municipal Stadium.

Clemson has been a consistent team in tournament play. The Tigers have won at least two tournament games in 32 of their previous 39 appearances. While Clemson has won the title just once since 1994, the Tigers have been to the championship round seven of the last 19 years. Clemson is also one of only two teams to play in all 39 ACC Tournaments. The Tigers join Virginia as the only teams to play in every ACC Tourney.

Only 15 times in the 39-year history has the #1 seed captured the title. Clemson has done it six times, Georgia Tech and North Carolina three times, and Florida State, Miami (FL), and Virginia once.

The Tigers have won the ACC Tournament with a perfect record five times. The Tigers were 3-0 in 1976 and 1978 in winning both events at Clemson, then they had a 4-0 record in winning the title at Raleigh, NC in 1980. Clemson’s only other perfect run through the tournament came in 1991, when a Tiger team that won a school-record 60 games had a 5-0 mark in the ACC Tournament held at Greenville, SC.

Clemson has a winning record against every ACC team (excluding Boston College, who has not faced the Tigers in the event) in tournament play with the exception of Florida State and Virginia Tech. Clemson is 9-11 against the Seminoles and 0-1 against the Hokies in the ACC Tournament.

Clemson was the dominant team when the ACC Tournament was played at Greenville, SC from 1987-95. In those nine tournaments, Clemson posted a 36-12 record, won the event four times, and finished second on two other occasions. Clemson won at least three games in eight of the nine tournaments held in Greenville as well.

The ACC Tournament began in 1973 and has been held every year but one since then. In 1979, Clemson won the regular-season title and was declared the conference champion. The tournament was not held because of a scheduling conflict between school exam schedules and the tourney. Clemson has been declared conference champion 14 times in history, more than any other school.

Clemson has had at least one final top-25 ranking in 15 of Leggett’s first 19 seasons in Tigertown. The Tigers have also been ranked #1 for 20 weeks by at least one of the three major polls under Leggett. Their last #1 ranking came on February 12, 2007 by both Baseball America and Collegiate Baseball.

In the overall ACC standings, Clemson finished in fifth place. It was the 19th time in 20 seasons under Head Coach Jack Leggett that the Tigers had a winning league record.

Tigers Lead the ACC in Stolen BasesClemson leads the ACC in stolen bases with 102 in 56 games, good for 1.8 steals per game. That is despite no Tiger totaling 20 stolen bases in 2013. Five different Tigers, Thomas Brittle (19), Shane Kennedy (18), Steven Duggar (15), Jay Baum (10), and Steve Wilkerson (10), have double-digit steals. Nine Tigers have at least six steals as well.

Crownover Led ACC in ERA in League GamesMatthew Crownover did what few freshmen in ACC history have done…lead the ACC in ERA in league games. In 36.1 innings pitched over seven starts, he had a 1.73 ERA, allowing only seven earned runs. That includes giving up only four combined earned runs in his last six starts in ACC regular-season games.

Moorefield a Lefty SpecialistSenior lefthander Joseph Moorefield (Woodruff, SC) has appeared in 13 games on the mound, all out of the bullpen, and has pitched 4.1 innings. He has been effective getting out lefthanded batters, as he has given up just one earned run (2.08 ERA) in 2013. Moorefield has made 62 relief appearances in his career as well.