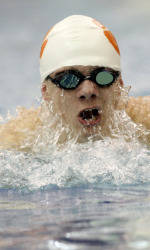 Tigers Tied for First as ACC Meet Kicks Off

ATLANTA, Ga.–The Clemson men’s swimming team made sure the 2011 ACC Championships at the Georgia Tech Aquatic Center started well on Wednesday, as a pair of historic relay swims has put the Tigers in a tie for first place with Virginia. Both teams ended Wednesday’s action with 72 points.

“I am proud of our men’s team,” Head Coach Christopher Ip said. “They have made it a mission to honor the tradition of Clemson University’s swim and diving program. We competed in two events tonight and ended up breaking three school records. The team will now have to refocus and carry the momentum into Thursday morning’s prelims.”

Clemson began the night with a school record-shattering swim in the 200 medley relay. The grouping of Chris Dart, Mark Schindler, Seth Broster, and Eric Bruck were victorious in that event, finishing with a time of 1:26.34 to edge North Carolina and pick up 40 points for Clemson.

The NCAA-B cut time bested the team’s previous season-high in the 200 medley relay by three and a half seconds. It is also the top time in school history, more than two seconds faster than the previous record of 1:28.45 that was set back in 2006.

Clemson also got a solid performance from the 800 freestyle relay team of David Gordon, Lucas Gerotto, and Dart. The foursome finished in third place with an NCAA-B cut time of 6:30.37 that broke another school record.

That time was exactly three seconds faster than the 6:33.37 that Lee Groseclose, Gordon, Reinke, and Dart swam last season. It was also more than 17 seconds faster than the previous season-high in the event. Gordon also set the school record  in the 200 freestyle with his 1:37.48 leadoff split, a time that bested his prior career high by almost two seconds.

The Tigers will return to the pool on Thursday afternoon with preliminary heats in the 500 freestyle, 200 individual medley, and 50 freestyle beginning at 11 a.m. Finals in those events, as well as the 200 freestyle relay, will begin at 7 a.m.