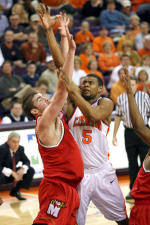 Clemson will meet Maryland in the first round of the ACCTournament, the first time Clemson has played the Terps in thetournament since the 1997 event. Like this season, Clemson hadswept the regular season series in 1996-97. However, the Tigerslost to Maryland in the ACC Tournament. Clemson is 1- 9 lifetimeagainst Maryland in the ACC Tournament with the only victory comingin 1964 when Clemson was the #3 seed. Clemson is 3-3 in ACCTournament games when it swept the opponent in the regular season.Clemson enters the ACC tournament having won three of its last fourconference games. This is the first time Clemson has entered theACC Tournament having won three of four since 1993. Sharrod Fordhas averaged 21.3 points and 10.3 rebounds to go with 31 of 49field goal shooting over the last four games. He scored 49 points,had 24 rebounds, shot 19-28 from the field and had 11 blocked shotsin two games vs. Maryland this year. Clemson was 4-4 in the secondhalf of the ACC season. No Clemson team has had a better secondhalf record since the league went to a 16-game format in 1991-92.Only North Carolina, Duke and Wake Forest had a better second halfrecord than Clemson this year. Clemson scored 88 points and 97points in the two games with Maryland this year. It marked thefirst time Clemson had ever scored at least 88 points in two gamesagainst Maryland in the same year, the first time Clemson had donethat against any ACC opponent since the 1986-87 season. Clemson hasalready won five more games this year than it did last year. Thatis the fourth best oneseason victory improvement in the last 52years for the Clemson program. In two games against Maryland thisyear Shawan Robinson made 13-20 shots from the field, including8-12 three-point shots. He averaged 19.5 points a game in the twocontests. Through games of Feb. 28, Clemson was the only team inthe nation in the top 20 in blocked shots (19th) and steals (12th).Sam Perry scored 22 points in two games this year against Maryland.The freshman scored just 61 points in 16 ACC games for the season.Clemson Head Coach Oliver Purnell won two conference tournaments atprevious coaching stops. He won the Colonial Athletic ConferenceTournament in 1992 as Old Dominion Head Coach and won the Atlantic10 Tournament in 2003 as the head coach at Dayton. Clemson hasnever won the ACC Tournament and been to the finals just once,1962.

Maryland holds an 84-44 lead in the series with Clemson. But,Clemson had a sweep this year, a 88-73 win at Clemson and a 97-93win at College Park. Prior to this year, Maryland had won 13straight in the series. Clemson holds a 32-25 lead in games playedin Clemson, including a 19-18 lead in games played at LittlejohnColiseum. The Tigers have won nine games in history in CollegePark, six of them in Cole Field house. The Terps have dominated theseries in College Park, winning 49 of the 58 games. Clemson ended aseven-game losing streak in College Park earlier this year with a97-93 victory. Clemson had lost 13 straight prior to this year whenClemson swept Maryland for the first time since 1996-97. Nine ofthose 13 losses were by double digits, so Maryland had dominatedthe series from 1998-99 through 2003-04. Clemson swept Maryland inthe regular season in 1996-97, a season in which the Tigersfinished eighth in the final ESPN/USA Today Coach’s poll, thehighest final ranking in Clemson history. Both wins were over top20 Maryland teams, the only time in history Clemson has defeatedthe same top 20 team twice in the same year. Clemson then lost toMaryland by 15 points in the ACC Tournament, denying Clemson of athree-game sweep of the Terps. The Tigers won four out of fiveagainst Maryland between the last meeting of 1995-97 and the firstmeeting in 1997-98, all when Rick Barnes was Clemson’s head coach.The last time Clemson won a game over a ranked team on the road wasat Maryland (1996-97), when the Terps were ranked 11th in thenation. Clemson has lost 31 straight games against ranked teams onthe road since that win at Maryland in 1996-97. Greg Buckner scored16 points and Terrell McIntyre added 13 to lead Clemson to its67-63 victory at the 11th ranked Terps. Clemson made 27-53 shotsfrom the field for 51 percent, while Maryland was at 48 percent,but made just 2-14 from three-point range. Keith Booth, now anassistant coach at Maryland, led the Terps with 16 points, whileLaron Profit had 14 points and seven steals. Four years ago the twoteams met at Clemson and it was a high scoring affair. Marylandheld a 59-56 lead at halftime before winning, 104-92. Clemson made13 threepoint goals in that game, led by Will Solomon who madeseven threes and scored 32 points. Clemson defeated a top 20Maryland team in Cole Fieldhouse twice. In the 1975-76 season, BillFoster’s first at Clemson, the Tigers downed Maryland 82-77 in oneof the most shocking upsets in Clemson history. Maryland was rankedsecond in the nation entering the game and it is still the highestranked road win in school history. It was just Foster’s second ACCgame as Clemson head coach. One of the scores for Clemson in thecontest was a behind-the-back shot from the foul line duringregular play, by Tiger guard Greg Coles. Tree Rollins, then ajunior, had a significant hand in that Clemson win. Clemson’s winsin Cole Fieldhouse took place in 1961-62 (75-68), 1965-66 (81-69),1975-76 (82-77), 1986-87 (80-79), 1992-93 (81- 73) and 1996-97(76-70). Clemson also won in College Park in 1939-40 (48-30) and1949-50 (60-55). Clemson won at the Comcast Center for the firsttime this year, 97-93 on Feb.22. Clemson vs. Maryland in 2004-05

Clemson scored at least 88 points in each game vs. Marylandthis year. It was the first time Clemson has scored at least 88points in two games in the same year against Maryland. It was thefirst time Clemson has done that against an ACC team since the1986-87 season when Clemson scored at least 88 in a pair of winsover Virginia. Clemson shot at least 50 percent from the field inboth games against the Terps, the only two ACC games this year thatClemson made at least half of its field goal attempts. Clemson shota combined 66-123 from the field in the two games, a .537 percent.That includes 15-30 from three-point range. Clemson won the pointsoff turnover stat in both games, 15-11 in the first game and 22-18in the second. Clemson had a postive turnover margin againstMaryland just twice in the last 14 games against Maryland enteringthis year. In the 80 minutes played between the two teams thisyear, Clemson trailed for a total of 11 seconds. Both games Clemsongot off to a good start. Clemson had a 10-0 lead to open the gameat Clemson, and a 10-2 lead to open the game at College Park.Clemson had 17 blocked shots in the two games against Maryland,including 13 in College Park. It was the most blocked shots in anACC road game in Clemson history. Ford had nine of those blocks, aschool record for an individual in an road game. Sam Perry scoredjust 61 points in 16 ACC games this year, but 22 came againstMaryland. Sharrod Ford had quite a stat line in two games againstMaryland this year. The senior from Suitland, MD scored 49 points,had 24 rebounds, 11 blocked shots and shot 19-28 from the field.Shawan Robinson averaged 19.5 points per game in the two games withMaryland this year in just 26.5 minutes per game. He was 13-20 fromthe field, including 8-12 on three-point shots. Clemson’s perimeterdefense held John Gilchrist to 7-28 shooting from the field in thetwo games combined. Maryland shot 40.1 percent as a team in he twogames, including 10-34 on three-point shots.