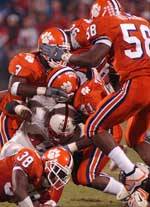 Clemson University’s Athletic Department and the American Red Cross of Pickens County are teaming up on Saturday, October 30th , the day the Tigers play NC State at Death Valley, to raise money for direct disaster relief to victims of the recent hurricanes and weather disasters along the east coast area. Fans will have the chance to donate money to the Hurricane Relief Fund at every entrance gate of the stadium, as American Red Cross volunteers will be standing with collection buckets starting when the gates open at 10:30 that morning.

The University’s Athletic Director, Terry Don Phillips, sees this partnership as a way for Clemson fans to help the extended family of ACC football, “These hurricanes and floods devastated so many homes, businesses, families and communities in the southeast, the same area that is home to the ACC,” said Phillips, “and we at Clemson University are pleased to provide a way for our great fans to donate through the agency known as the provider of disaster assistance. The American Red Cross will have volunteers from Pickens County in our stadium collecting money to go specifically for the folks who were affected by and are still dealing with the aftermath of the hurricanes.”

Fund raising after a disaster is a normal and necessary event for the American Red Cross, but having the opportunity to reach such a large group of people in one place is unique. Because this particular series of weather-related disasters struck largely the states with Atlantic Coast Conference schools located in them, Phillips and the athletic department staff found themselves in a special situation to facilitate the efforts. “We appreciate very much Clemson’s Athletic Department working so closely with us to raise the needed funds for this hurricane relief effort,” Floride Caldwell, Pickens County Red Cross Board Chairman, says. ” Just like Red Cross chapters all over the country, the Pickens County chapter is asking its local community to step up and help our neighbors. Being at a Clemson game with so many people in attendance certainly sets us up to have a successful campaign. The American Red Cross and Tiger fans surely is a favorable combination!”

Donations will be taken when the gates open at 10:30 until shortly after game time at noon. Contributions can be made in cash or by check. So ACC football fans, plan ahead and help the American Red Cross help the disaster victims!