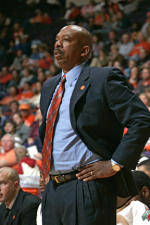 Clemson and Penn State will meet in the ACC-Big Ten Challengefor the first time since the 2002-03 season, but the fourth time inthe seven years of the event. Clemson has a 2-1 lead in the overallseries with Penn State and in the ACC vs. Big Ten Challenge. Bothhead coaches in this game are 0-2 lifetime against the otheropponent, but neither coach has represented his current school inthe series. Clemson head coach Oliver Purnell was 0-1 against PennState as head coach at Old Dominion and 0-1 as head coach atDayton. Ed DeChellis is 0-2 against Clemson and both losses tookplace while he was the head coach at East Tennessee State. Clemsonenters this game with a 4-0 record. This is the first time Clemsonhas been 4-0 since the 2002- 03 season and just the second timesince the 1997- 98 season. Clemson has a scoring margin of +28.3points per game in the first four games, the third best scoringmargin through four games in Clemson history. Clemson has won eachof its first four games by at least double figures for the firsttime since the 1995-96 season. Like Clemson, Penn State is alsoundefeated at 3- 0. This is the first time the Nittany Lions havewon their first three games since the 1999-00 season. That yearPenn State improved to 4-0 with an 85-75 victory over Clemson. Theywill be trying to duplicate that feat on Tuesday evening. Clemsonhas a 4-2 all-time record in the ACC-Big Ten Challenge. Clemson istied for third for the best record among ACC teams in the event.Duke is 6-0 and Wake Forest is 5-1. Clemson, Florida State and NCState are all 4-2. The ACC has won the challenge every year it hasbeen held, including by a 7-2 margin each of the last two years.This is the seventh year of the ACCBig Ten Challenge. Penn Statehas a 1-3 record in the event with the lone victory coming againstClemson during the 1999-00 season. Both Penn State and Clemson havebeen efficient when it comes to handling the ball so far this year.Clemson has a 78/62 assist/turnover ratio, while Penn State standsat 67/38. Clemson hopes to give the Nittany Lions their biggesttest when it comes to handling the basketball. Penn State hascommitted just 12.7 turnovers per game, while Clemson has forced24.0 turnovers per game thanks to 16.3 steals per game. Clemson hasseven players averaging between 8.8 and 11.5 points per game. TheTigers have had four different scoring leaders in the first fourgames. Akin Akingbala leads the Tiger scorers with an 11.5 average.