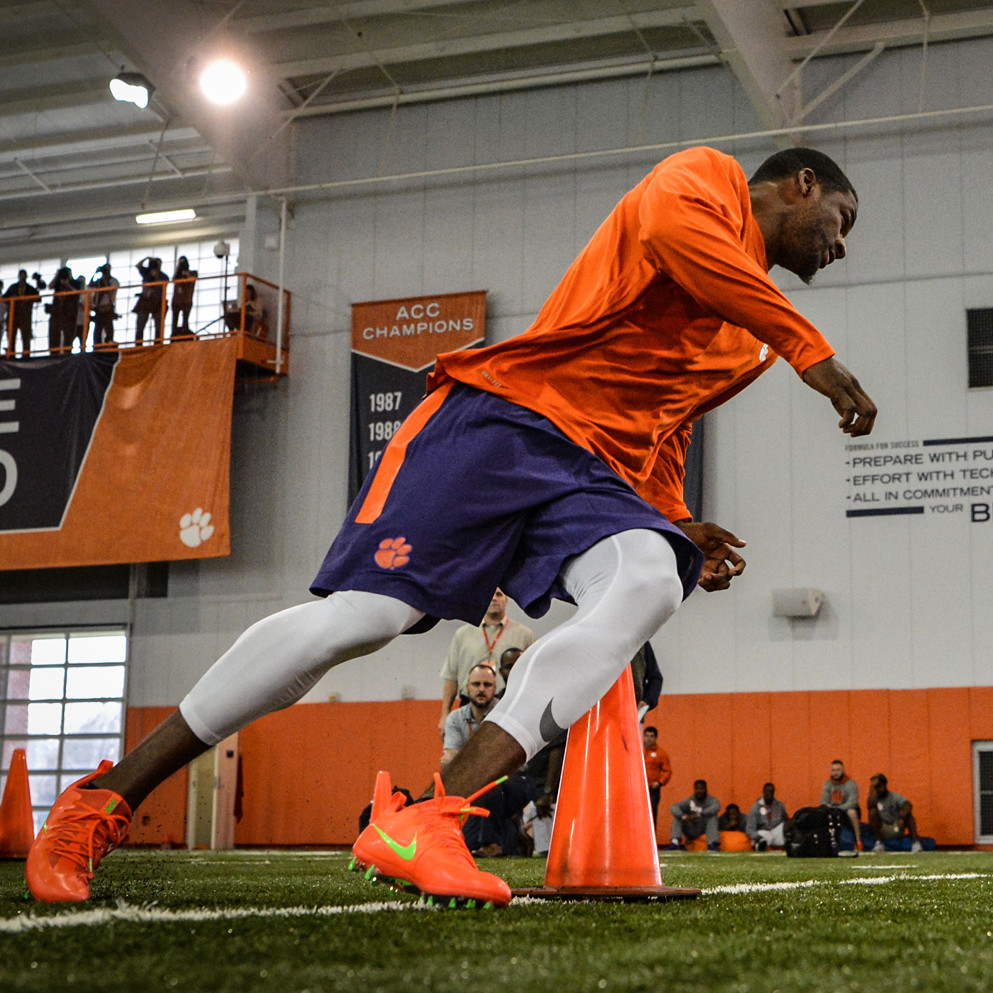 Pro Timing Day challenged 15 of Clemson’s finest professional football hopefuls, as the departing players showcased their skills in front of representatives for all 32 NFL teams. One of the representatives in attendance was Buffalo Bills coach Rex Ryan, father of Clemson holder and wide receiver Seth Ryan. Decked out in Clemson gear, Ryan made sure everyone knew how he felt about Dabo Swinney’s team, calling it the best program in the country.

One of the NFL Draft hopefuls, safety Jayron Kearse, said that he felt his childhood drams coming true as he went through some of the drills in the indoor practice facility Thursday morning.

“It was a great experience to have all of the teams come out here and watch Clemson,” Kearse said. “It was exciting to be out here. A lot of my childhood dreams came true at the (NFL Combine), but a lot more of them came true today.”

When he heard what Ryan had to say, Kearse was not surprised.

“I agree with Rex Ryan 110 percent,” he said. “This is the greatest program in the country, and it will remain that way.”

Shaq Lawson, who went through some agility drills Thursday to help solidify his projected first-round status, echoed his teammate’s thought.

“Of course we are the best,” Lawson proclaimed. “I believe we do everything the right way at Clemson, on and off the field.”

Lawson, the national leader in tackles for loss in 2015, is looking forward to the opportunities his Combine and Pro Day performances will bring him.

“I love showing my athletic ability to each team,” he said. “There was a lot of doubt, but I gave it my all today and worked hard. I am ready for the next step and to find out who my new team is; where my new home is.”

While the newest Tiger prospects waited their turn at Pro Day, several Clemson standouts from the past were in attendance, including Atlanta Falcons defensive end Vic Beasley.

“I think the guys all did great, there were a lot of good times put up,” Beasley said. “It was great for me to see people that I played with out there doing a great job.”

One of his former teammates that got a chance to put on a show was cornerback Mackensie Alexander, who interviewed with teams at the Combine but did not work out while continuing to recover from a hamstring injury suffered in the National Championship Game against Alabama on January 11.

Alexander ran the 40-yard dash with an unofficial time in the 4.5 range. He then posted the top vertical leap among Clemson’s contingent, jumping 37.5 inches. Like Lawson, Alexander has been projected by many as a first-rounder.

Defensive coordinator Brent Venables spent the day watching several players from his unit get their shot.

“They made me wish I had them for one more year,” he admitted. “It looks like they have been working incredibly hard, and they showed what they have been showing us for the past three or four years.”

“It is great for our players, to see all of their hard work pay off and their dreams have an opportunity to come true. It’s neat to see them putting themselves in the position to earn the right to play in the NFL.”