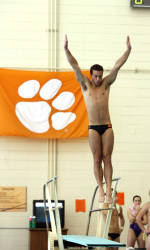 CLEMSON, SC – The Clemson swimming and diving teams took on NC State in McHugh Natatorium in front of a crowd of 700, and came away with a hard-earned split. The Clemson women won 173-126, while the men dropped a 165-135 decision in the final few events. The Tigers honored their sixteen seniors prior to the meet, four men and twelve women. The women improve their record to 5-4 (3-3 ACC), while the men are 2-7 (0-6 ACC).

Junior David Giambra continued his strong diving efforts for Clemson, notching a school-record in the three-meter event for the second consecutive meet. The Yardley, PA native’s 376.05 broke a pool record as well, held by David Ovelson of South Carolina, who had a 360.53 in 2005. The score is the seventh-best effort in the ACC this season, a perennially difficult diving conference.

In the win, Giambra edged the Wolfpack’s Austin Hampton by less than six points. In the same event, Ryan McDaniel put in a career-best 321.00, which qualifies him for NCAA Zone competition. Hampton would edge Giambra in the one-meter event 320.40 to 307.43. McDaniel took third with a 290.10.

The Tiger women were firing on all cylinders for most of the meet, but it wasn’t until the final event that the records came down. Rachel Regone, one of the top sprinters in the nation, led off the 200 free relay with a 22.79, which shattered the old mark for the 50 free of 23.18, a record that has stood since 1988, by Angel Myers of Furman.

The group followed Regone’s lead, as senior Lauren Sindall (22.97), Alexandra Allen (23.52), and Michelle Parkhurst (22.93) combined to swim a 1:32.21, breaking the pool mark in the 200 free relay by more than two full seconds. This foursome is the twp-time defending ACC Champions in the event, and will look to continue that streak this season.

Parkhurst, the reigning ACC Performer of the Week, and Sindall also combined to win the 200 medley relay to start the meet, along with Katrina Obas. Regone, in a separate group, swam a blistering 22.27 on the anchor leg of the third-place relay.

Freshmen Brooke George and Cassie Self notched NCAA Zone qualifying scores of 280.20 and 267.23, respectively, on the one-meter boards. These are career highs for each student-athlete.

The Lady Tigers were able to grab control of the meet early one, as they won the opening relay, and proceeded to sweep 1-2-3 in the 1000 free, 200 free, 200 butterfly, and 50 free. Freshman Kelly Fowler had a very strong meet, putting in a lifetime-best 57.50 in the 100 back to finish second. Her time ranks her third among Tiger backstrokers this season. She also won the 200 back in 2:03.76, less than a second off the all-time top-ten.

The men’s meet was hotly contested for most of the meet, with several lead changes. Each event tested the limits of the student-athletes and coaching strategy, as the meet came down to the final two events.

One of the better races was in the 100 back, where Tom Recko and Jason Chatlosh finished third to complete the sweep. Recko later won the 200 back by over four seconds, notching a 1:47.99.

The Tigers will return to action on Jan. 31 as they travel to Duke for their final dual meet of the season. The women and all of the divers will then travel to the ACC Championships in College Park, MD on Feb. 18-21. The men will then compete the following week at the same site.