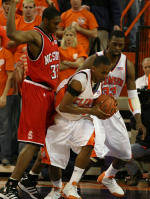 This will be the only meeting between Clemson and NC Statethis year. This is the second consecutive year NC State has come toClemson for the only meeting of the year between the two teams.Clemson is coming off a 73-63 win over Georgia Tech in Atlanta. Itwas the third ACC win for Oliver Purnell and the Tigers in the last11 league road games and all came after losses of 24 points or morein the previous game. Clemson’s win over Georgia Tech was its thirdin January. This is the first time since January of 1997 thatClemson has won more than two games in the first month of thecalendar year. Clemson had a 6- 2 record in January of 1997. ShawanRobinson needs 10 points to reach 1000 for his career. It would besignificant if he broke the barier against NC State because he isfrom Raleigh, the home of the NC State campus. Robinson is 16-29from the field, including 6-14 from the threepoint line in hiscareer against NC State. Robinson had 15 points in Clemson’s winover Georgia Tech. Clemson had a +15 turnover margin in its winover Georgia Tech, the best turnover margin for the Tigers in anACC game since Feb. 22, 1969 when Clemson had a +17 turnover marginin a loss to Maryland. Clemson won the game despite a -22 reboundmargin, the lowest rebound margin in a Clemson victory in history.Clemson overcame a five-point halftime deficit to gain victory atGeorgia Tech, just the third time in the last 16 years that Clemsonovercame a halftime deficit to win an ACC road game. Three-pointshooting has been the key stat for NC State in games at Clemsonunder head coach Herb Sendek. Sendek is 4-5 in Littlejohn Coliseum.State has made 49-94 from three-point land (.521) in its four winsat Clemson under Sendek and 28-122 (.222) in its five losses. IfClemson gains victory over NC State it would give Clemson four winsin the first half of the ACC schedule for the first time since1996-97 when Clemson was 6-2 in the first eight ACC games of theyear. Akin Akingbala and Julius Powell are both coming off careerhigh tying performances. Akingbala tied his overall career high andestablished his high scoring figure in an ACC game when he had 19in the win at Georgia Tech. Powell had 16 points off the bench atTech to tie his high of 16 against Penn State. Powell made his lastsix shots from the field in that game, including four from 3-pointland. Clemson is just two wins short of equalling its victory total(16) during the entire 2004-05 season. This This is the first timesince 1996-97 that Clemson has won at least 14 of its first 19games.