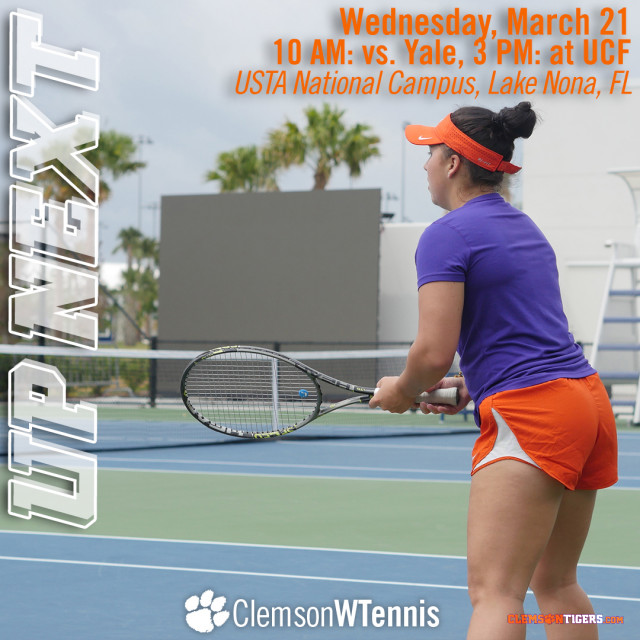 – The Tigers (7-8, 1-5 ACC) are coming off of a tough 4-3 loss on the road at Boston College on March 18. Marie-Alexandre Leduc, Ally Miller-Krasilnikov and Daniela Ruiz won their singles matches against the Eagles.

– Clemson has won the doubles point in nine of its 15 matches on the season. The Tigers have a 6-3 record in those nine matches.

– Junior Marie-Alexandre Leduc is ranked 21st in the nation in singles. She has a 15-7 overall record, and a 6-4 record in dual matches. She has played all 10 of her dual matches at No. 1 singles, and has seven wins over nationally-ranked opponents on the season.

– Leduc and fellow junior Fernanda Navarro are ranked 34th nationally in doubles. The pair is 16-5 overall, 8-2 in dual matches and 4-0 in ACC dual matches, and has currently won six matches in a row.

– Leduc and Navarro moved up 26 spots from the March 6 doubles poll, when they entered the rankings for the first time at No. 60.

– Navarro was named ACC Player of the Week on Feb. 20, for her performances the week of Feb. 12-18. Navarro was undefeated in singles and doubles play in two matches, and she clinched the Tigers’ 4-3 upset over 11th-ranked Wake Forest on Feb. 18.